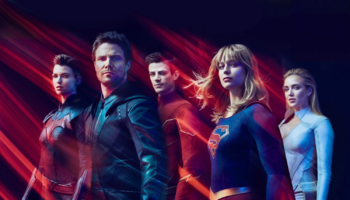 Defy your world. Dare to live in ours.note From left to right: Batwoman, Green Arrow, The Flash, Supergirl, and White Canary.
"In the beginning, there was only one...a single black infinitude. Then the infinitude found release, and finally, the darkness broke, filling it with life. With The Multiverse. Every existence multiplied by possibility and spread out before space and time in infinite measure. Civilizations rose and fell, and rose again to cross realities grasping expanse. Life, a precious gift persevering in the face of every obstacle, until finally, the age of heroes was born."
— Oliver Queen

The "Arrowverse" (or "Arrow-verse", etc.) is a common Fan Nickname given to a group of superhero TV shows based on DC Comics that air on The CW and share the same continuity and producers.

It began in 2012 with an adaptation of Green Arrow (Oliver Queen) called Arrow, hence the Fan Nickname. In its second season, it introduced The Flash (Barry Allen) before he got his powers (he got struck by the legendary lightning bolt in his second appearance), and he soon gained his own spinoff naturally called The Flash. An animated web series starring Vixen, guest-starring Arrow and Flash cast members as their characters, was streamed on CW Seed in 2015. The second live-action spin-off, Legends of Tomorrow, began airing in 2016. It features The Atom, who debuted during Arrow's third season, and Firestorm, who debuted in The Flash, teaming up with both new and old characters. Another animated CW Seed show, Freedom Fighters: The Ray, aired in 2017, and also has the honor of being the first superhero series with a gay lead character. The third live-action spin-off, Batwoman, premiered in 2019. Two more spin-offs were announced in 2019: a successor to Arrow called Green Arrow and the Canaries

For years, the Arrowverse was not in the same continuity as the DC Extended Universe shared movie universe that began with Man of Steel. Warner Bros., which owns DC Comics, used to have a stringent embargo that prevented crossovers of its film and television divisions. The result was that there was no direct hint that Superman or Batman were known or active in Arrowverse until Supergirl, which features Superman as a supporting character, was integrated to the franchise in 2016, while Batman was first directly referenced in 2017. Superpowered abilities and the supernatural in general were not common until The Flash introduced metahumans, though there were "hyper-realistic" elements that skirted the line. References to the greater DC Universe (not to be confused with DCEU) are common; elements of the Batman mythos were heavily incorporated into Arrow. There are some characters in the shows that are in the DCEU, but played by different actors. After a nearly seven-year embargo, a DCEU character, specifically the version of The Flash as portrayed by Ezra Miller, made an appearance within the Arrowverse proper, establishing the DCEU as as part of the Arrowverse's multiverse (about which, see below).

Executive producer Geoff Johns always likened all DC movies and TV shows to parts of a multiverse and that crossovers with shows not set within the same continuity are not 100 percent out of the question. The Arrowverse introduced the concept of the multiverse in the second season of The Flash, which is exactly like it sounds; hundreds of universes (called "Earths", though a universe also includes the outer space) exist where things play out differently, even though they might share elements. All four live-action series mentioned above are set within the same universe called "Earth-1". After the cancellation of Constantine, which aired on NBC, the character (played by the same actor Matt Ryan) and show transferred to the Arrowverse, with Constantine appearing in the fourth season of Arrow, while the show's setting was placed in Earth-1. Supergirl, originally a separate show airing on CBS, was crossed over into the Arrowverse in 2016 when Barry Allen appeared in a first season episode, followed by a full-on integration after the series underwent Channel Hop to The CW in its second year, but the show's setting remained independent, being set in "Earth-38". Black Lightning, which airs on The CW but not originally envisioned as part of the Arrowverse, was integrated to the franchise starting with the 2019-2020 crossover Crisis on Infinite Earths, which merged its Earth, as well as that of Supergirl, with Earth-1, now called "Earth-Prime".

Most other live-action DC shows that aired concurrently in other networks are self-contained and independent of the Arrowverse. Series aired in the DC Universe streaming service, which includes Titans and Doom Patrol - two considerably Darker and Edgier DC-based shows - as well as Stargirl, are considered to exist within the same multiverse as the Arrowverse, but in the cases of Titans and Doom Patrol, even though they share the same executive producer, Greg Berlanti, the other producers involved invoke Schrödinger's Canon and say that while they are represented in the Arrowverse, they themselves also have their own canons. See below for which shows are set on which Earth.

Arrow, the show that began the 'verse, was the first one to end; its eighth and final season of 10 episodes began airing in Fall 2019 as part of the build-up to Crisis on Infinite Earths and concluded on January 28, 2020.

Also called the "Berlanti-verse" (referring to executive-producer Greg Berlanti), the "Flarrowverse" (a portmanteau of Flash and Arrow), and the "Beeboverse" (named after Beebo, the absurdly cute and popular stuffed toy that became a runaway hit with fans and has appeared in all of the shows - barring Black Lightning - so far).

Concurrent Earths note Worlds from shows that run alongside the current shows. in the Multiverse include:

Other Earths note Works retroactively added to the multiverse after their conclusion. set in the Multiverse include: