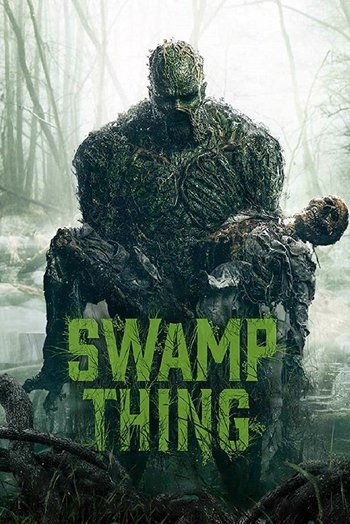 Go green, or else.
Advertisement:

Based on the classic Swamp Thing comic series, the series is about CDC Doctor Abby Arcane, who returns to her home of Marais, Louisiana to investigate a deadly swamp-borne virus. Upon looking into the virus, she develops a bond with scientist Alec Holland. After Holland tragically dies, Arcane discovers the mysteries of the swamp and that Holland may not be dead after all when a mysterious creature claims to be him.

It premiered on May 31st, 2019, with episodes being released weekly like other DC Universe shows. After only one episode, the show was cancelled because of dissatisfaction from both WarnerMedia and AT&T executives. Luckily, it happened quickly enough that the crew were able to rework the finale into a proper ending. Despite its cancellation, however, it was subsequently licensed by

The CW in 2020, where it made its linear television debut in October.