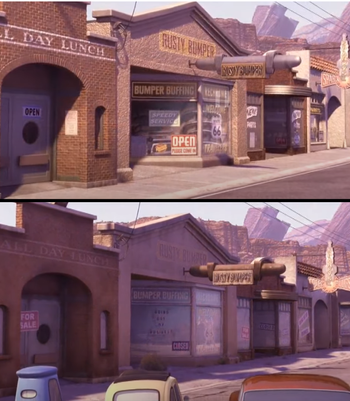 "They laid a highway a few years back
Next town over by the railroad track
Some nights I'm glad it passed us by
Some nights I sit and watch my home town die"
— Tift Merritt, "Laid a Highway"
Advertisement:

A town that has lost its main reason for existing, or the support systems it needs to thrive. As a result, it's losing its inhabitants far faster than they're replaced. If this continues to its logical end, this community will become a Ghost Town.

Easily spotted by the number of buildings that are shuttered or boarded up, particularly on its main thoroughfare. The streets are nearly empty of vehicles, and the grass hasn't been cut around quite a few houses. Quite a few of said houses will have a barking dog tied to a cinderblock, inoperable vehicles and/or appliances in varying degrees of decay rusting on the lawn, possibly some lawn ornaments that are considered "tacky," or holiday decorations unironically left in place even though it's August, and inhabitants who spend their days sitting out front in cheap plastic lawn chairs with a cigarette perpetually clutched between two outstretched fingers and a cheap beer in the other hand.

The local pastime, for many people, is some type of drug (meth, heroin, crack, whatever the "flavor of the decade" happens to be). There may also be children running amok in the yard while the adults pay them no mind. If you ask, the inhabitants will tell you Nothing Exciting Ever Happens Here. At least not since the rutabaga factory burnt down, or the hot springs dried up, or the Widget Factory sent all its jobs to Ruritania, or Bigville got the freeway exit.

The economy, meanwhile, probably hinges on monthly benefits payments, and the local Wal-Mart is likely the de facto town meeting place. The few jobs that do still exist are either part-time and pay minimum wage with little or no benefits, or full-time unskilled labor positions that pay terribly, and have limited opportunities for advancement that are largely contingent on who you are due to rampant nepotism and cronyism - unless people belong to or are associated with one of a select few dynastic local families, they simply do not have a shot at rising through the ranks. If there is a decent-paying job available that doesn't require higher education or specialized training, it's probably dangerous, unpleasant, and likely to necessitate an early retirement due to the physical toll that it takes.

Most of the inhabitants will be older folks, safely retired or desperately holding on to what few remaining jobs there are. There are relatively few younger adults—most have fled to greener pastures, and the remaining ones are either uneducated, dedicated to something in the town, or resent being trapped by obligations. The teenagers and children are likewise mostly interested in leaving as soon as they can manage it, and woe betide the kid whose parents inexplicably decide to move to Dying Town from the big city. Worse still is the kid who had a good shot at leaving, but wound up getting yanked right back in by circumstances (frequently a Career-Ending Injury, an unplanned pregnancy, an economic downturn that affects even the places where there were better opportunities, or ailing parents), and never recovered.

May be the hometown of a cast member, and a visit to it will explain a lot about them. Sometimes overlaps with Town with a Dark Secret, especially in the mystery and horror genres. It also sometimes overlaps with Wretched Hive when the problems that tend to plague impoverished towns full of people who are there because they can't get out set in, especially if the area was dependent on manufacturing and now has no livable jobs; when people get desperate, some will inevitably turn to crime, or turn to drugs and alcohol in an attempt to cope with the stress. A common plotline in more idealistic stories is for a new inhabitant to find some way of turning things around and restoring the town's prosperity, especially if it is a Close-Knit Community that can rally around him. A more cynical twist has the newcomer promising this to con the remaining inhabitants out of their meager savings.

See also the Wrong Side of the Tracks.

Contrast Everytown, America, which it may once have been, or possibly Boom Town for that real Riches to Rags story, or Suddenly Significant City.

Seaside by the Seashore

Arlo discovers his dad's old boardwalk home in Brooklyn, Seaside by the Seashore, which is scheduled to be demolished and replaced with an expansion.

Seaside by the Seashore

Arlo discovers his dad's old boardwalk home in Brooklyn, Seaside by the Seashore, which is scheduled to be demolished and replaced with an expansion.