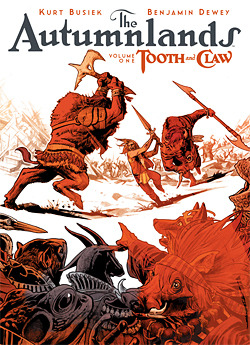 "Are you ready, my august fellow practitioners? For our spells to fail?"
Advertisement:

An Image comic from writer Kurt Busiek (Marvels, Astro City), artist Benjamin Dewey (I Was The Cat, Tragedy Series) and colorist Jordie Bellaire (The Manhattan Projects, Pretty Deadly). The series has 14 issues, originally published from 2014-2017. There were plans for further issues, but Busiek's ongoing health issues forced a delay and Dewey moved on to other projects.

Dunstan the terrier lives in the floating Seventh City of Keneil in the Autumnlands, a magical world populated with talking animals. Gharta, a wizard and warthog, has brought a gathering of wizards to Keneil to perform a ritual that will allow them to summon the "Great Champion," a mythical messiah from the past that is Shrouded in Myth, in hopes that he may be able to stop the decline of magic in the world. They perform the ritual...but something goes wrong and all the magic is sucked from the city to open the portal.

The spells keeping the city floating in the sky fail, and the city comes crashing to the ground below, causing massive destruction.

And someone has come out of the portal. Is it the Great Champion...or something else?

Ho! This comic provides examples of: