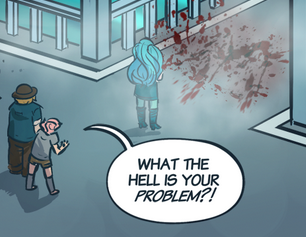 Violence is disturbing when, rather than awesome, violence is shown or perceived to be frightening, disgusting, perhaps even nauseating, i.e. when it denotes brutality, sociopathy, sadism, and other socially undesirable traits, rather the socially desirable traits that are power, capacity for leadership, and effectiveness, staples of The Hero, especially the badass, and the reason why the Big Bad is cool.

War Is Hell, especially when it's a depiction of the battlefield rather than the civilian (un)life, can strongly overlap with this, but being a helpless civilian caught in the middle of a war is worse. Gorn is when the violence is thrilling rather than merely loathsome. No-Holds-Barred Beatdown and Extreme Mêlée Revenge are distinguished from a mere Curb-Stomp Battle by the heavy doses of this trope involved. May be involuntarily invoked by the Action Hero and the '90s Anti-Hero, and by any uses of the Jack Bauer Interrogation Technique and/or Cold-Blooded Torture.

Compare Family-Unfriendly Violence, a variation that often shows up in family-friendly works.