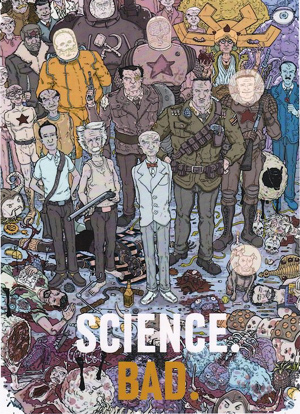 Everyone knows about how the atomic bomb was made, how America brought together the worlds greatest scientists. But did they know that the bomb was just the least of many Manhattan Projects?

An Image series written by Jonathan Hickman and illustrated by Nick Pitarra, The Manhattan Projects features Oppenheimer, Daghlian, Von Braun, Richard Feynman, and Albert Einstein as they fight zen-powered robots, meet aliens, and discover wormholes. Meanwhile each of the members of the league have their own alliances and agendas. As the group redefines the twentieth century, they must face threats from all around, as well as inside.

In 2014, it was revealed that following the main cast going their separate ways the book will be continued as a series of miniseries following different main characters. The first of which is call The Manhattan Projects: The Sun Beyond the Stars and focuses on Yuri and Laika.

Contrast with East of West, Jonathan Hickman's other alternate history of America series.