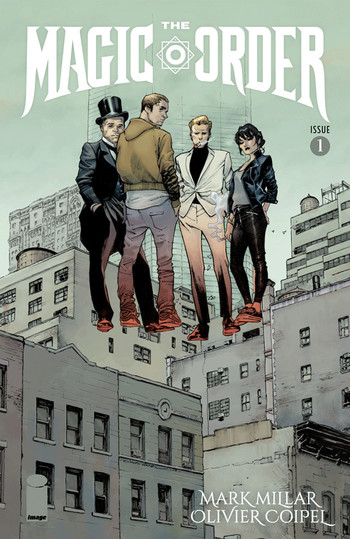 "A good magician always has a trick up her sleeve."

Beyond the veils of space and time, there are monsters wildly out of our collective imaginations loose and threatening reality. They are combated by a power group of wizards known as The Magic Order, a collective of various magician families sworn to protect the regular masses. Between being stage magicians and battling Eldritch Abominations, their operations are largely not unlike a magical mafia.

Which stands to reason that a mob war be on the horizon.

It soon happens, as Madame Albany of the Albany family makes her move against the Moonstones, the family currently heading the Order, by assassinating various powerful figures with the help of a mysterious being known only as "The Venetian." Her goal? To obtain a powerful tome under the Moonstones' possession named The Orichalcum, a book of the darkest spells of history and the only thing in existence that could theoretically bring the dead back to life. Now the Moonstones have to fight back against Albany and ensure that the Orichalcum doesn't fall into the hands of someone as wicked as her.

The Magic Order is a six issue mini-series written by Mark Millar and illustrated by Olivier Coipel as the first of Millar's comic deals following the acquisition of his Millarworld brand by Netflix. An adaptation is already being considered to be helmed by James Wan of Saw and Aquaman fame.