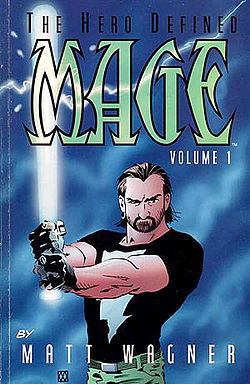 "Until the next issue, always remember that magic is green."
— Foreword, The Hero Discovered #2
Advertisement:

An Urban Fantasy comic-book by Matt Wagner, taking influence from Arthurian Legend and The Monomyth.

Disaffected every-man, Kevin Matchstick is thrust into a world of superhuman abilities, mythological creatures and magic baseball-bats after being discovered by Mirth, The World Mage. The comic-book follows his character arc, as he grows to accept and understand his powers and role as a hero.