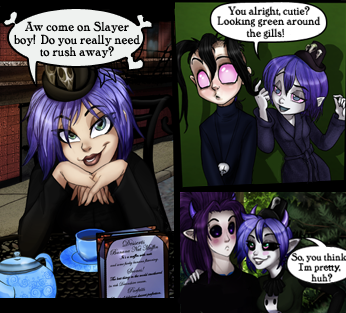 Yiska with Vic, Yiska with Hex, Yiska with Daray
Kirk: Shapeshifters. I thought you were mythical.
Martia: Give a girl a chance, Captain. [takes the form of Iman] It takes a lot of effort.
McCoy: … but how do we have any way of knowing if this is the real you?
Martia: I thought I would assume a more pleasing shape.
— Star Trek VI: The Undiscovered Country
Advertisement:

A little research goes a long way in this regard, and a lot of subtlety is needed to keep the target from figuring out the seducer is a shapeshifter. ...Which is actually fairly rare for this trope, since the shapeshifter will typically be showing off their new forms in a superpower equivalent to a striptease while the seducee is looking. If the fact that they're being seduced by a shapeshifter doesn't give them Shapeshifting Squick, they may actually find it really kinky and start making suggestions.

One of the quickest ways for this tactic to fail is for the shapeshifter to not do any research on the seducee or badly botch said research. This can happen if they take the form of a lost lover, an ex, or their anti-type, the form likeliest to turn them off and make them run screaming.

If the shapeshifter is impersonating someone whom the target is in love with, it crosses with Bed Trick. The trope is also likely to be involved in The Schlub Pub Seduction Deduction.

Subtrope of Power Perversion Potential. Compare You Sexy Beast, Glamour. Not to be confused with Shapeshifting Lover, where they only have one alternate form (and it's animal to human). Might be related to Shapeshifters Do It for a Change, however.

The Leprechaun pretends to be the attractive Dr. Reeds to trick Harold to open a security door.

The Leprechaun pretends to be the attractive Dr. Reeds to trick Harold to open a security door.