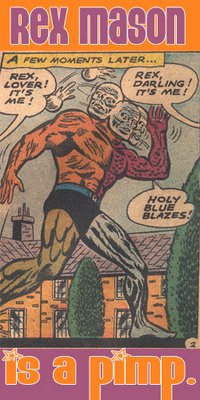 This is really the only family-friendly illustration we could choose for this page...
Leela: Alright, Alcazar, I just have one last question for you.
Alcazar: What's that?
Leela: If you can change form, why didn't you change it in the one place that counts?
Everyone: WOOOOO!
— Futurama, "A Bicyclops Built for Two"
Advertisement:

One of the first things our sweaty, clammy imaginations suggest to us is that a shapeshifter's sex life must be really interesting. I mean, they can turn into anything right? Ahem...

One of the cleaner subtropes involves a hero seduced by an exploitative shapeshifting minion. This can also apply to metaphorical shapeshifters, such as people with Jekyll & Hyde complexes. It usually suggests an amount of mischief, if not outright wickedness, since it may not be so much a plan to trick the hero as their own little perversion. There are a few ways for the hero to handle this situation: