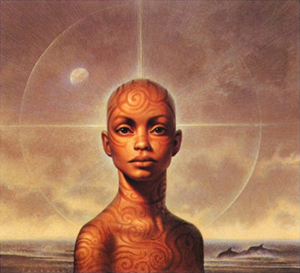 Cover image of one edition of Wild Seed.
Advertisement:

The Patternist series, also called the Patternmaster series, is a science fiction series written by Octavia Butler. The series spans the appearance and rise of powerful psychics among the human race as well as the invasion of the Clayark aliens.

The series originally consisted of five books, but the third (Survivor, published 1978) was disliked by the author and not reprinted. The remaining four have been republished in the Seed to Harvest (2007) omnibus, containing the books Wild Seed (1980), Mind of My Mind (1977), Clay's Ark (1984), and Patternmaster (1976), in series-chronological order rather than publishing order.