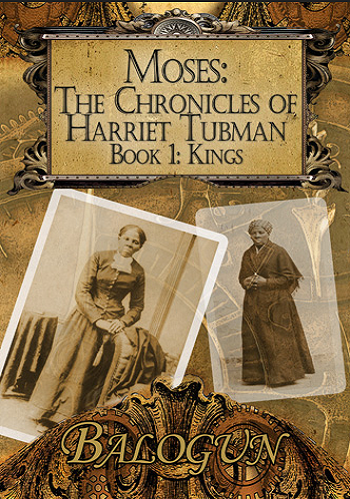 1865. Former slave and active abolitionist Harriet Tubman is on a mission from one John Wilkes Booth to rescue Booth's daughter Margaret from kidnappers demanding a ransom. With her incredible fighting skills, the little girl is rescued in no time. But Harriet has a new problem: Margaret has never heard of Booth and claims her father is Edwin M. Stanton instead.
Advertisement:

Soon after, Abraham Lincoln is assassinated by the treacherous Booth, and Harriet's life becomes a lot more complicated when Secretary of War Stanton comes looking for her, convinced that Harriet kidnapped Margaret, and bringing a squad of superpowered assassins to take Harriet down. Harriet has superpowers of her own though, and her fantastic allies are more than willing to lend her a hand.

One of the first stories of what author Balogun Ojetade calls Steamfunk, Steampunk from an African / African-American perspective. Currently consists of two novellas, Kings and Judges, with more planned.