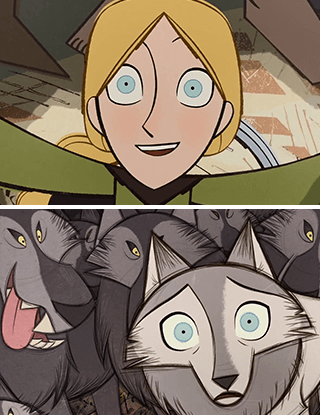 Giles: How did you know it was me?
Buffy: Your eyes. You're the only person in the world that can look that annoyed with me.
— Buffy the Vampire Slayer, "A New Man"
Advertisement:

It seems that by some law of Shapeshifting, shapeshifters are unable to change their eyes, no matter how skilled they are at changing form. Showing the eye changing or corrupting into that of a different species is an effective way of showing mental takeover or transformation-induced humanity loss thanks to this. See Glamour Failure for a similar trope and Voices Are Mental for the vocal version of this trope.

A specific type of Morphic Resonance. Much like Voices Are Mental, some examples may be visible to other characters, others are merely Stylized for the Viewer.