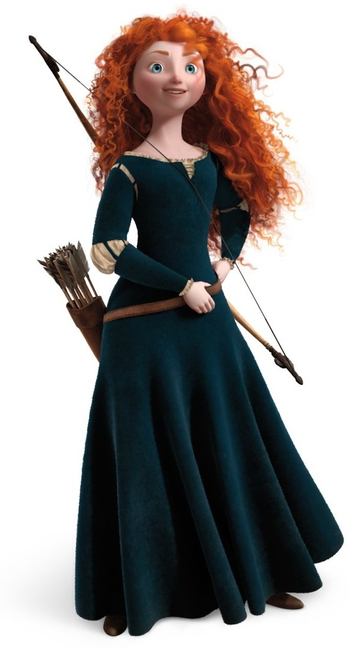 As the eldest child of King Fergus and Queen Elinor of DunBroch, her life is weighted with responsibilities and expectations. When Merida blatantly defies an ancient tradition, the consequences of her actions prove disastrous for the kingdom—and especially when innocent bystanders end up affected. She races against time to make right the result of her reckless behavior and mend the bond torn by pride.

Merida is also Pixar's first entry into the Disney Princess franchise, and the first one overall to lack a love interest. 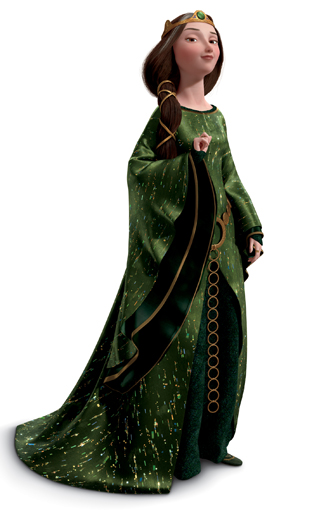 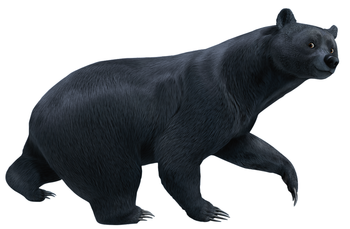 Queen Elinor is fiercely dedicated to the well-being of her family and kingdom. As the measured, diplomatic counterpoint to her more impulsive husband, Elinor carries the weight of the kingdom on her shoulders in order to maintain the fragile peace between the volatile clans. Elinor strives to instill in Merida the knowledge and manner of a royal, but her vision of her daughter’s future is at odds with Merida’s desire to forge her own path. 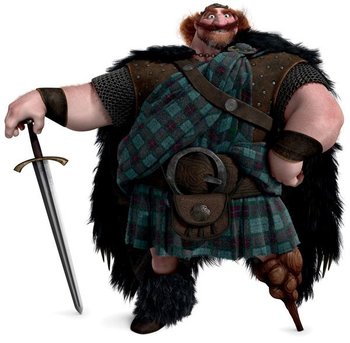 Fergus of DunBroch is a heroic warrior king with a knobby peg leg – the result of his much-regaled skirmish with the demon bear Mor’du. His vendetta against the beast who took his leg makes Fergus a ferocious and determined bear hunter. Protector of his kingdom and family, Fergus has a heart as big as his barrel chest and boundless love for his wife, Queen Elinor, and their triplet sons. But his pride for his first-born daughter Merida is unmatched, and he has gifted her his great skill and passion for the sword and the bow. 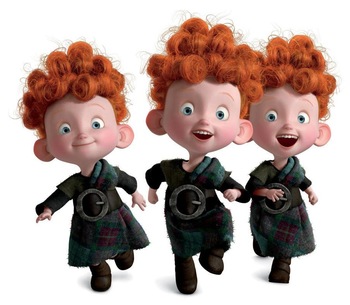 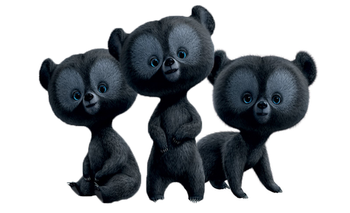 The sons of King Fergus and Queen Elinor and younger brothers of Merida, the identical triplet princes Harris, Hubert, and Hamish are adorable, redheaded, and always ready to stir up a bit of mischief, especially if sweets are at stake.

The Three Lords and Their Sons

The Lords in general 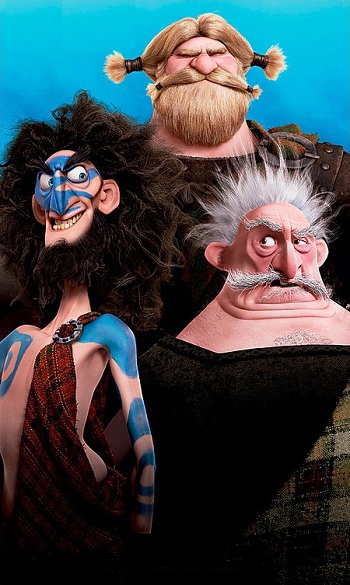 The three vassal lords to King Fergus; Lords Dingwall, Macintosh and MacGuffin; are the unruly, overzealous leaders of their respective clans. Though once warring factions, they have been united under the sword of King Fergus and held together by the diplomacy and political savvy of Queen Elinor. The clans are summoned to Castle DunBroch to compete in the Highland Games, but the lords are soon outraged when Merida defies a sacred tradition. The clans fall back to their history of fervent feuding, which threatens the fragile peace of the entire kingdom. 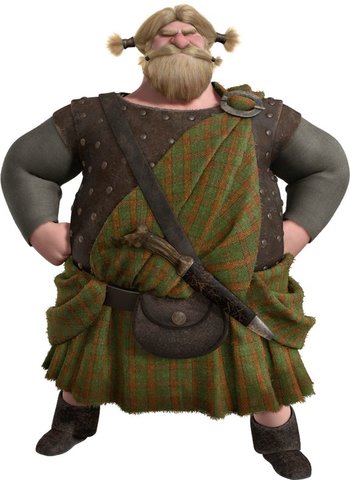 Strapping Lord MacGuffin is full of brawn and dignity. Though a man of few words, his deep voice resounds across the land demanding respect and contributing to his reputation as the most even-handed and reasonable lord in the kingdom. Even so, like his fellow lords, MacGuffin isn't opposed to a first-rate brawl or full-throated belly laugh.

The wiry, indignant and off-kilter leader of his clan, Lord Macintosh is always a heartbeat away from hysterics. His savage smile and fierce appearance, body bedecked in blue war paint and chest pridefully puffed up, proclaim that he's ready for battle at any moment, though his bark may be worse than his bite. 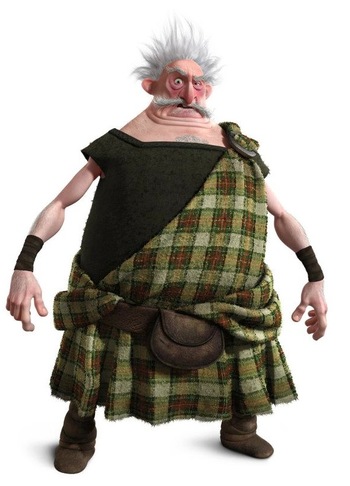 Grumpy and quick-tempered, the scrappy Lord Dingwall doesn't let being height-challenged get in the way of solving his problems with fisticuffs. Never one to shy away from an old-fashioned fracas or high-spirited kerfuffle, he has no qualms taking on even the burliest adversary to assert his own position in the kingdom. 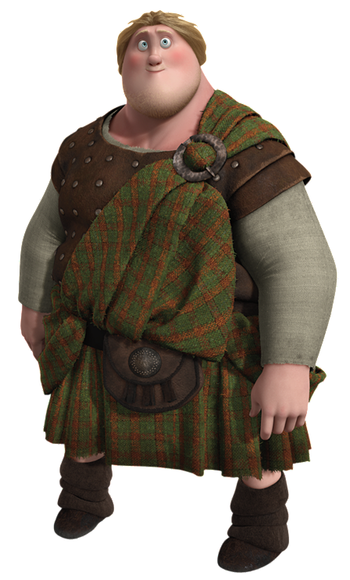 Speaking an uncommon Scottish dialect that is incomprehensible to most, Young MacGuffin is a shy lad of large proportions. Being the center of attention is not his strong suit, but he will not hesitate to leap into a fight alongside his father and clan when the occasion arises. 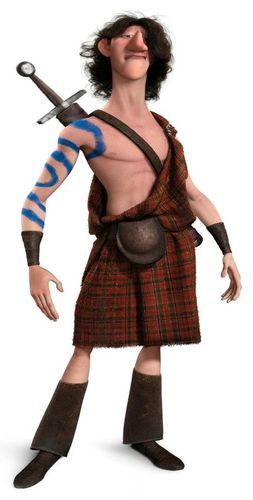 As the first-born son of a lord, Young Macintosh knows he has it all; athletic physique, undeniable charm and long flowing locks that leave the lasses swooning in his wake. Vanity and legions of devotees can also be a distraction when it comes to bragging rights at the Highland Games.

Gangly, guileless and often lost in his own head, Wee Dingwall is the awkward son of Lord Dingwall. Though Wee Dingwall displays an eagerness that outweighs his inherited small size, his father will proudly employ his only son as an attack dog when the moment is right. 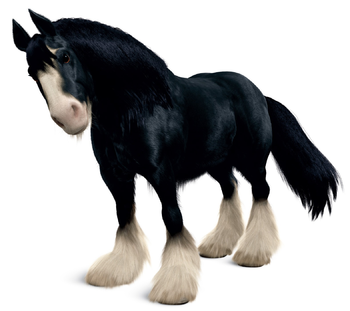 Black as night with ivory muzzle and fetlocks, Angus is Merida's powerful Shire and her most trusted confidant. Angus is Merida's escape from castle life into the deep forest and the Highlands beyond. Merida target shoots from her perch on his broad back and is able to coax him into one adventure after another. Angus can be balky, stubborn and faint-hearted at times, but is ultimately a devoted and faithful friend to Merida. 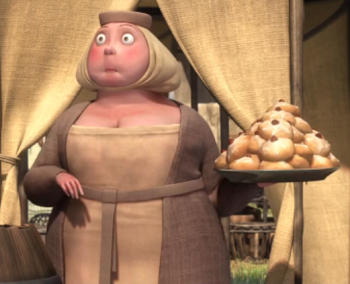 A maid in the castle, she winds up frequently being the victim of the triplets' antics.

Mor'du is the antagonist of Brave, hence the original title of The Bear and the Bow. A feral and dangerous presence, this black bear fought King Fergus when Merida was a wee lass, and he chomped his leg off and won, something that Fergus has vowed to seek revenge for ever since. He stands 15 feet tall, his face is scarred with one dead, red eye, his black fur is coarse and disheveled, and he is covered in arrows and bruises, trophies of those humans who attempted to kill him. He puts Merida in danger more than once during the course of the movie. 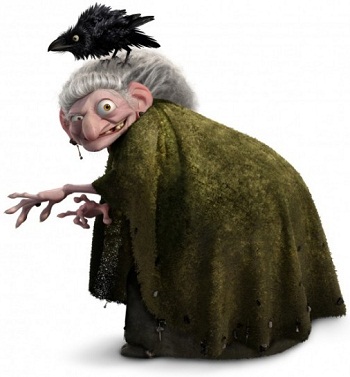 A Witch (also referred to as a Wise Woman, and while you're here she personally prefers the title "Woodcarver") whom Merida seeks out when she wishes to change her fate. She seems a little batty — alright, way more than a little — but there's no denying she's got magical chops. Though she considers carving wood to be her true calling, she'll still whip up a spell for a customer... at the right price. 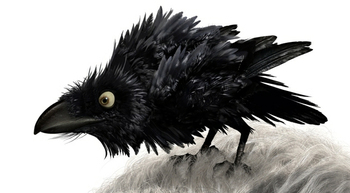 The talking crow who hangs around in the Witch's cottage.