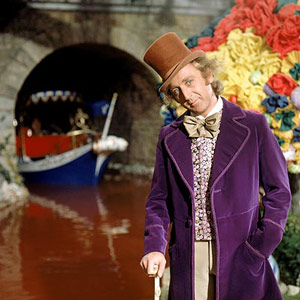 A boat ride on a chocolate river through a candy forest? Who wouldn't want to work for him?!
Mac: Have you ever known the commander to do anything...
Bud: Improper? No. Unconventional? Yes!
— On Commander Harmon Rabb, Jr. in JAG
Advertisement:

The Wonka is the genius nut who should, by all logic, be fired. That's never going to happen — this genius nut runs the show.

The Wonka makes perfect sense to himself (and is usually male), but utterly confuses those around him and leaves them wondering whether or not he really is all there. The Naïve Newcomer will think he's genuinely nuts until he does something amazing that proves he's merely using a different brand of logic. Long term employees will either groan at the craziness, become like him, or be so desensitized they'll regard it as mundane and pay no attention.

These sort of characters are usually Freakish Loners, but if they do have friends, they will be close ones. Genius qualities do not make a Wonka, but they must show some sort of prowess in at least one area in order to confirm that they are in fact not mad, but merely "differently sane". Other common traits include irreverence, lack of social skill or any sense of danger and doing bizarre things that, nevertheless, make perfect sense if you take a step back and think outside the box, because that's where Wonkas live. From a psychological standpoint, The Wonka perfectly characterizes the schizotypal personality.

Also different from Bunny-Ears Lawyer in that the lawyer is a brilliant employee who isn't fired because they are so good at their job. The work they do is worth tolerating their weird mannerisms and unusual quirks. They win a cost/benefit analysis. The Wonka is a brilliant employer (or otherwise an authority figure) and can't be fired because they own the company. Also the Wonka's unusual brand of sanity is likely the reason for their success while success and quirks are unrelated in the Bunny-Ears Lawyer.

If you have a case where The Wonka indeed runs the entire show, you have The King of All Cosmos.

If the roles are reversed such that The Wonka is the one who's the normal one and it's everyone else who's crazy, you've got the Only Sane Man.

Compare with Inexplicably Awesome and Eccentric Mentor. Contrast with Genius Ditz and Obfuscating Insanity. (Like The Mad Hatter, Wonkas don't have an act to drop.) Also contrast The Caligula, where being mad and powerful makes the person a danger to himself and others.

Please note that this trope doesn't necessarily apply to parodies of Willy Wonka himself. For that kind of trope, please see Charlie and the Chocolate Parody.