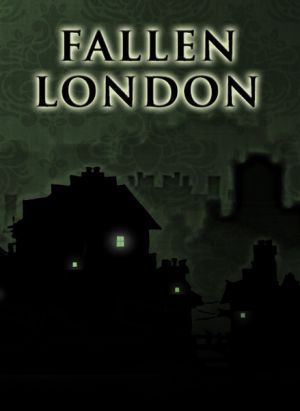 One City. A Thousand Stories
Forty years ago, London was stolen by bats.
Advertisement:

Welcome, delicious troper. Fallen London (formerly Echo Bazaar) is a browser game produced by Failbetter Games. It's set in the eponymous city, a mile underground and a boat down the river from Hell, where people are either piecing together the mystery of what exactly happened, trading souls, or just politely murdering other people. Players start off as prisoners plotting to break out, and after that... they're free to do whatever they want.

The game draws its atmosphere and structure from classic literature, particularly the works of T. S. Eliot and Jorge Luis Borges, but also more comedic writers such as P. G. Wodehouse. Much of the gameplay consists of figuring out exactly what the plot is, and how Victorian London came to be situated so very far below the surface. There are four stats a player can choose to improve on as they continue their story down in the Neath: Dangerous (fighting prowess and intimidation); Watchful (perception and mental acumen); Persuasive (charm and wit); and Shadowy (stealth and cunning). Exploring London improves one or more of the stats, and further quests are revealed to the player as they progress in their explorations. The player gradually learns more about the world and uncovers its secrets, and players are free to explore any of the paths in any order they like, or simply all at once.

The gameplay is turn-based and uses actions, which refresh over time. Microtransactions can be used to buy more actions and to explore vast amounts of locked content. Subscribers also gain access to an exclusive story hub where a new, long story is made available to them every month.

Fallen London can be played here

, set in the same universe, was funded through Kickstarter. A spinoff game, Sunless Sea, is available on Humble Bundle, GOG.com and Steam. Its sequel, Sunless Skies, was released on 31st January 2019, and its story involves heavy spoilers for this game. A prequel Visual Novel, Mask of the Rose, arrived on Kickstarter in February 2021, and is projected to come out by June 2022.

open/close all folders
A-H
I-P
Q-Z
Perusing a Page of Examples has been reset. A conclusion, or a new beginning?
Watchful is increasing...