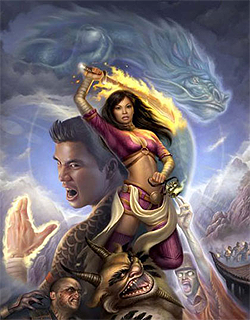 Jade Empire is an Action RPG computer game developed by BioWare for the Xbox in 2005 and subsequently ported to the PC and, much later, to Macs and iOS mobile devices. It is set in a fantasy world based on Imperial China in which all (local) myths are true: ghosts, demons and ogres litter the landscape, magic is fueled by chi, and a Celestial Bureaucracy keeps the world in harmony. And there are flying machines that shoot fireballs.

The story begins in the little town of Two Rivers, with you as the senior student in a martial-arts school run by the mysterious Master Li, a stern old man who is much more skilled than might be expected for a small-town teacher. Life is peaceful, though your friend Dawn Star is troubled by visions of angry restless spirits. Then the town is attacked by the Lotus Assassins, a sect of fighters who do The Emperor's dirty work. Li tells you he had prepared you for this day because you are the last of the Spirit Monks, warriors of the destroyed temple city of Dirge, guardians of the Water Dragon (a goddess of both life and death) and shepherds of the dead. Your training means you are The Only One who can restore the Water Dragon, who has been brought down by the Empire's rulers, and put the dead to rest. The story follows with twists and turns as you travel to various towns of the Empire, uncover the mystery of what happened twenty years ago, help the people you meet in their troubles, make new allies and learn new fighting methods.

Jade Empire was BioWare's first original IP, as well as one of the few occidental RPGs in the Wuxia genre. It shares features with their earlier Knights of the Old Republic, including a Karma Meter, but has a simpler gear system and real time combat with a variety of techniques. The Karma Meter tries to step away from "good/evil" in favor of a philosophy of "Open Palm" and "Closed Fist" paths, an idea which they would take further with Mass Effect.