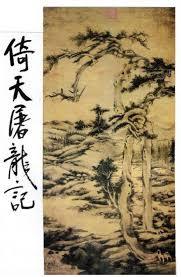 The third book in the Condor Trilogy by Jin Yong, set a century after the end of The Return of the Condor Heroes. It was first serialised from July 1961 to September 1963 in the Hong Kong newspaper Ming Pao.

The story revolves around a pair of priceless and extremely powerful weapons, known respectively as the Heaven Sword and Dragon Saber, which many covet. Either or both of them are thought to allow their wielder to rule the wulin.

The hero, Zhang Wuji, is of mixed heritage: his father, Zhang Cuishan, hails from the reputable Wudang Sect under the master Zhang Sanfeng, while his mother, Yin Susu, is from the unorthodox Heavenly Eagle Cult. As a boy, he lives with them and his godfather, Xie Xun, on the isolated northern island where he was born. He returns to the Chinese mainland and loses his parents after they are cornered on Mount Wudang by several pugilists coveting the Dragon-slaying Saber. At the same time, he is wounded by the Xuanming Elders and survives after seeking medical treatment from Hu Qingniu, a master physician.

His adventures further lead him to discover the long-lost Nine Yang Manual and he masters the inner energy skills within, becoming a formidable fighter. Subsequently, he resolves the conflict between the Ming Cult and the six major orthodox sects, who are intent on destroying the cult. He earns the respect of the cult's members and becomes its leader. He reforms the cult and helps to improve its relations with the other sects. He becomes a key figure in leading the rebel forces to overthrow the Yuan Dynasty.

A film trilogy based on the series, Heaven Sword And Dragon Sabre was made by Hong Kong's Shaw Brothers studios in 1978.

Tropes exclusive to this book or at least especially prominent in it: