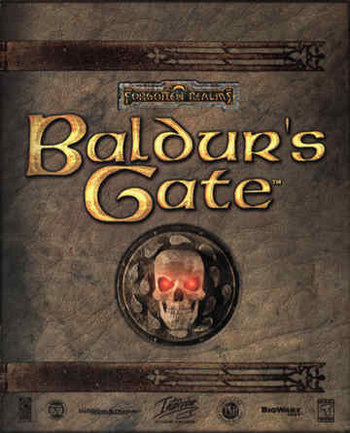 "OK, I've just about had my FILL of riddle-asking, quest-assigning, insult-throwing, pun-hurling, hostage-taking, iron-mongering, smart-arsed fools, freaks, and felons that continually test my will, mettle, strength, intelligence, and most of all, patience! If you've got a straight answer ANYWHERE in that bent little head of yours, I want to hear it pretty damn quick or I'm going to take a large blunt object roughly the size of Elminster AND his hat, and stuff it lengthwise into a crevice of your being so seldom seen that even the denizens of the nine hells themselves wouldn't touch it with a twenty-foot rusty halberd! Have I MADE myself perfectly CLEAR?!"
— Gorion's Ward, to Portalbendarwinden
Advertisement:

Baldur's Gate is a Western RPG released on December 21, 1998, and the first game in the Baldur's Gate series. The game was developed by BioWare and published by Black Isle Studios and Interplay Entertainment.

Set in the Dungeons & Dragons' Forgotten Realms universe, the game puts you in a shoes of the young ward of a former adventurer named Gorion. After leaving your home of Candlekeep with your foster father, you are attacked by a mysterious Black Knight in a demonic skull mask and his allies, who kill Gorion as he urges you to flee. Thus begins your journey to discover what the evil warrior wanted with you, leading you throughout the lands of the Sword Coast and into the political intrigue surrounding the city of Baldur's Gate.

"You must gather your party before venturing forth"