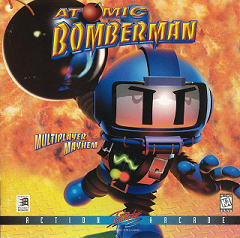 Atomic Bomberman is a 1997 installment in the Bomberman franchise for Windows 95. It is a slight oddball in the franchise, being developed by an American company (Interplay, under license from Hudson Soft), who designed the game using pre-rendered 3D sprites and backgrounds, techno-inspired music, and the extensive use of voice samples (provided by Charlie Adler and Billy West, no less!). Gameplay retains the classic grid-based formula, and while there is a short campaign mode, the game's focus is on its multiplayer. In fact, it and Saturn Bomberman are still the only games to offer ten-player online.

It's over, you can go outside and play now.