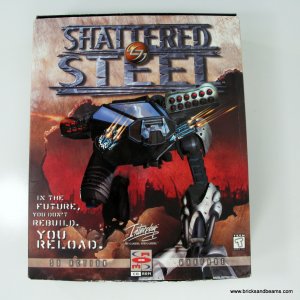 "In the future, you don't rebuild. You reload."
Advertisement:

Shattered Steel is a Humongous Mecha Simulation Game developed by BioWare (yes, that BioWare) and released in 1996 by Interplay Entertainment for DOS PCs. Some time later it received a Mac port by now-defunct Logicware.

It is the year 2132. Space is being colonized at a rapid pace, with huge mining and manufacturing companies leading the way. The wealthy Core Worlds rely on the seedy Frontier Worlds for resources needed for production and expansion. The mining companies once had massive paramilitary security forces, though a war between two big companies over a resource-rich planet ended in armed intervention by the Core Navy and heavy sanctions being put on the extent of the MegaCorps' military power. It became necessary to hire heavily-armed and armored mercenaries to protect their interests, whether against rival companies or raids by Space Pirates.

You are one such mercenary. Armed with your Planet Runner, a bipedal war machine that puts the firepower of an entire armored division in the hands of one man, you have been hired by a Mega-Corp to investigate reports of pirate raids at their facilities on the planet Lanios III. However, nearly immediately you discover that the aggressors are not pirates, but a hostile alien race bent on our destruction. Cue Stuff Blowing Up and steel getting shattered.

The game has up to 16-person multiplayer over a local connection. It is also notable for being one of the earliest games to allow real terrain deformation; you can make some really deep craters with your guns, if you can spare the time and ammunition.