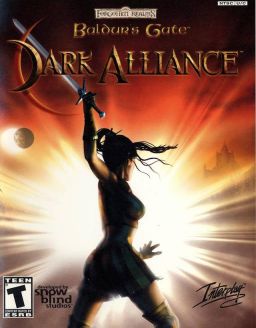 Baldur's Gate: Dark Alliance is the Spin-Off of the popular Baldur's Gate franchise. Besides the name, the only main element it shares with the originals is the setting. Unlike its namesakes, which were classic computer RPGs, Dark Alliance was an action adventure dungeon crawler game with a heavy focus on combat and co-op gameplay, drawing heavily from the style of the Gauntlet and Diablo games and can feasibly be credited with paving the way for such games as Champions of Norrath, X-Men Legends, Marvel Ultimate Alliance and many other console games of the sixth generation.

The player is offered the choice of three characters:

The plot is simple: Once again something is amiss in the city of Baldur's Gate. A new Thieves' Guild has arrived and has declared war on the existing one — a troubling prospect as this new guild brought scores of monsters with it and has no problems with killing. Our heroes are tasked by a local agent of The Harpers to end this devastating gang war, only to discover that the new guild's agenda is larger than everyone thought...and that they are someone else's pawn.

Despite the genre shift, the game was well received and spawned a sequel with new characters. Said characters are:

This time around the plot is a bit more complex. News of the Onyx Tower, the Big Bad's fortress from the first game, has spread across Faerun, thus inspiring a wave of heroes to home in on Baldur's Gate for a chance to bring it down and earn their own glory. Unfortunately, by the time they get there, it turns out they've Missed the Call since the Tower has already been destroyed and its owner defeated. However, the heroes responsible for saving the city disappeared shortly after.

There's still plenty to do in Baldur's Gate, ranging from yet another Thieves' Guild, to solving a series of grisly murders, random monster-killing sidequests, and eventually serving once again as an agent for the Harpers—who among other things wish to reconstruct the Onyx Tower for themselves in order to keep it out of the hands of the Zhentarim. What they don't know, of course, is that someone else wishes the Tower too, and is secretly manipulating them all...

Though it still has chapters (five instead of three), Baldur's Gate remains the player characters' home base rather than it shifting with each chapter, with each of the many quests, subquests, and sidequests allowing them to range all over the Western Heartlands through numerous multi-level dungeons—in many ways it is literally an expansion of the first game. The ability to customize weaponry, armor, and items with the incorporation of jewels has also been added.

The first game is particulary noteworthy in its All-Star Cast. Practically every speaking character is voiced by a very recognizable industry veteran. Just in the first five minutes after the titles, you have Jennifer Hale, Tony Jay, with Michael Bell, Cam Clarke, Grey DeLisle and MANY others joining later

The game and its sequel contain examples of: