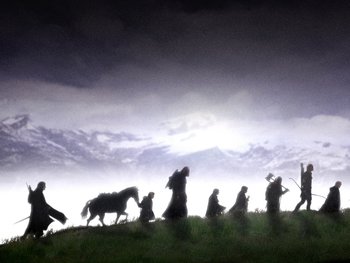 Without a monster or two it's hardly a quest!
Merely a gaggle of friends wandering about!
"Where the road is dark and the seed is sowed
Where the gun is cocked and the bullet's cold
Where the miles are marked in the blood and gold
I'll meet you further on up the road"
— Bruce Springsteen, Further On Up The Road
Advertisement:

Quests feature The Hero and a bunch of supporting cast members traveling across the world with a firm goal in mind: to recover a McGuffin, collect all the Plot Coupons, Save the Princess, defeat the Big Bad, locate a loved one or all of the above. Quite possibly an Impossible Task, to get rid of him. Will usually involve lots of incidental minor adventures, running into oracles and wise men, fantastic creatures and damsels dispensing items that may help you on your quest. A great device, because it allows the writer to do character interaction and showcase exotic locations, and give The Hero a good reason to Walk the Earth. Used mostly in a fantasy world, but can also take place in a modern or mundane setting with enough work-around.

Older versions just set the character off on his quest in the wilderness about them.

Often undertaken by Hitchhiker Heroes or people on The Homeward Journey.

The problem with such a story from a modern perspective is that they can actually tail off too much into the various side-stories and forget the main goal that the characters originally started out on. This was less of a problem before, as Medieval writers often deliberately wrote a network of plots, subplots, and sub-subplots branching out like a tree. Examples of this are Spenser's Fairy Queen, Arabian Nights, and Romance of the Three Kingdoms.

Christopher Booker's The Seven Basic Plots separates The Quest from Overcoming the Monster. While both involve a journey, the Overcoming the Monster plot is far more focused on heading straight for the Monster (with perhaps a side quest for magic weapons), while The Quest concentrates on a variety of obstacles including Monsters, Temptations, Deadly Opposites, and a Journey to The Underworld. (This probably indicates that if the heroes don't realize there's a Big Bad to fight until after the halfway point, it's following The Quest plot.) Also, The Quest is the plot most likely to include companions (a small group, or just one companion - or, as with The Odyssey, a Red Shirt Army).

Compare The Hero's Journey. Though separate and distinct tropes, the two don't just overlap, they have adjoining apartments and raid each other's refrigerators Kramer-style. The main difference is that a quest has a stated goal, and the focus is mainly on the adventures had along the way to that goal; a hero's journey tends to be undertaken in response to events thrust upon the hero(es), and focuses on the personal growth of the characters as they find (or overcome) their destiny.