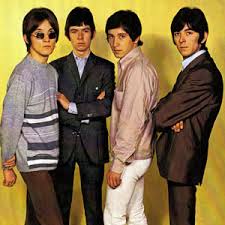 The Small Faces was a British mod group that started up in London back in 1965, and went on to become one of the most influential bands of the 60's. They started out as a Mod band playing raunchy music influenced by R&B and Soul. They were the East London counterpart to West London's The Who. Indeed, if any band was ever "number two to the Who" in the Scooter-Riding Mod scene, it would be this one. Yet, frustratingly for them, they failed to crack the US market in the way so many of their contemporaries like The Who and The Kinks had.

With the Concept Album Ogdens' Nut Gone Flake, the band introduced psychedelic elements to their music, resulting in their most memorable song and biggest American hit, "Itchycoo Park". However, their success didn't last, and the band disbanded in 1969 (after Marriott infamously quit on New Years Eve 1968), and Lane, Jones and McLagan joined up with Ronnie Wood and Rod Stewart of The Jeff Beck Group to form a new combo called Faces, while Steve Marriott teamed up with future superstar Peter Frampton in Humble Pie. They did partially reunite from 1975 to 1978 (with Rick Wills of Foreigner and Jimmy McCulloch of Wings participating), though that didn't last. Somewhat ironically, considering their rivalry, Jones would become The Who's drummer after Keith Moon's death. Both groups became successful in The '70s and are now counted as important innovators in the Blues Rock genre. McCulloch died of a heroin overdose in 1979, Marriott died in a house fire in 1991, Lane succumbed to complications from Multiple Sclerosis in 1997, and McLagan died from a massive stroke in 2014.

Like The Beatles and The Who, a major influence on the late seventies/early eighties Mod Revival and the Britpop genre in The '90s.

This group has examples of: