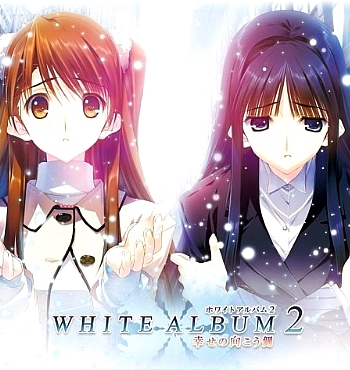 Happiness is a transient thing, like the falling snow...
Advertisement:

White Album 2 (ホワイトアルバム2) is a Japanese Visual Novel produced by Leaf. Although it shares the same name as White Album as well being set in the same world, albeit almost two decades later, it bears little connection to the first game/anime aside from the songs that it reuses from the former: the titular White Album, sung by Yuki Morikawa, and Sound of Destiny sung by Rina Ogata.

It's close to the school festival, and Light Music Club members Haruki Kitahara and his good friend Takeya are in a bit of a pinch. They want to perform for the school festival, however they're pretty much all that's left in the club. They need to find new members, both for the performance as well as ensure the LMC's survival, as with just two members they've fallen well below the numbers needed to be considered an official club. Despite the gravity of the problem, Takeya hands over the responsibility to fill out the club's numbers to Haruki.

Through luck and circumstance, Haruki somehow manages to find the members they need: Setsuna Ogiso, a beauty known for her participation in the school's beauty contests and who Haruki discovers has a wonderful singing voice; and Kazusa Touma, an introverted yet extremely talented pianist, and the mystery performer from the adjacent room that Haruki's been playing along with his guitar for a while now. Though getting the two to agree to help the LMC seemed innocuous at first, Haruki unknowingly set into motion a series of events that would bind the fates of the three of them together for the rest of their lives...

Produced by Satelight, an anime of the same name aired during Fall 2013 Anime Season, and adapts the first part of the series, Introductory Chapter.

for the series came out, and contains playable After Story-style epilogues for both Setsuna and Kazusa's True ends.

which takes place after Kazusa's ending in the After-Story was released as well.