Releasing from the Promise 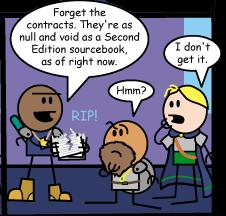 A promise is a promise. (And an agreement is an agreement, and a contract is a contract.) It will bind for whatever term it stated or until whatever condition was required is fulfilled — forever if neither was — or leave a character The Oath-Breaker forever.

Unless you're let off.

Normally, only the person you made it to can do it, though sometimes the person on whose behalf it was made can — if Sir Jack promised Queen Alisandrine to protect Princess Esmeralda, either the queen or the princess might be able to let him off, provided he accepts it. Oaths made to a god — or sometimes just on the god's name — can be absolved by a religious authority, sometimes. A Magically Binding Contract can mean that only the attempt can be made, though it still indicates Character Development.

Usually this is a way to indicate development, and a shift from an almost contractual (if not actually contractual) relationship to an open-ended one powered by love, friendship, or trust. There is always drama inherent, particularly if it started out as a Leonine Contract, in that this will demonstrate whether those things really have that power at this point. Or not.

Delicacy may be required to prevent hurt feelings, and if it's lacking, the promise-maker may feel insulted and even rejected. A powerful More Hero Than Thou argument often ensues if the promise-receiver is trying to break the association for the other character's good. Honor may insist that he can not be freed even by the promise-receiver. And insult may be taken in some cultures, where being released from the oath carries the implication that the promise-maker was so flawed that the promise-receiver doesn't want to keep him on. (The Dirty Coward may show his true character by his cheerful indifference to the disgrace of receiving this; he may even ask for it, which all but amounts to being The Oath-Breaker.)

On the other hand, if the promise-maker lacks scruples, or if it was a Leonine Contract, he may be pretty earnest in efforts to convince the other to give up the promise. Exact Words may be used toward this end as well as evading the spirit of the oath.

Also, Exact Words may be wittingly used by both characters to allow the technical fulfillment of the vow that neither one wants. The noble who swore that Princess Alisandrine will enter the chapel where she is to be crowned only over his body may lie down on the steps and direct her to step over him.

If the character received things in return for the promise, things can get interesting. If the thing is no longer possible or applicable, it may merely be a gracious acknowledgement of the fact. However, if the character gets to keep the things anyway, he will often feel guilty. If he doesn't get to keep it, his reaction may vary from fury in high drama, or despair, to a Hilarity Ensues attempt to weasel the promise-receiver out of freeing him.

An exchange of vows often requires mutual agreement, and is very ticklish to bring up. Betrothals are a special case; depending on the culture, it may be only by mutual agreement, only by some flaw, or only by the woman.