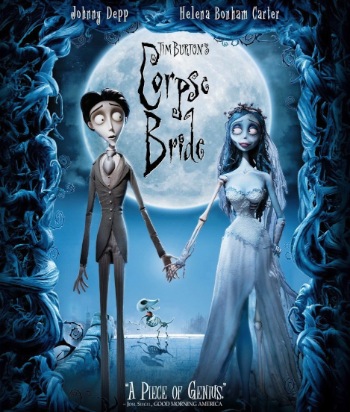 Only Tim Burton could make necrophilia kinda cute.
"There has been a grave misunderstanding."
Advertisement:

Corpse Bride is a 2005 romantic comedy musical film directed by Mike Johnson (who previously worked on James and the Giant Peach and The Nightmare Before Christmas) and Tim Burton, and a Spiritual Successor to Henry Selick's The Nightmare Before Christmas (of which Burton was the producer, chief designer and story writer). The film mixes German Expressionism elements, stop motion animation by Cosgrove Hall and Laika (in their first official project), gothic melodrama and macabre sense of humour, and is based on an old Yiddish-language Jewish folk tale from Russia with songs composed by Danny Elfman.

Victor, the son of some newly wealthy fishmongers, is entering into an Arranged Marriage with Victoria, a beautiful young woman from an Impoverished Patrician family. The couple find out that despite their differences, they actually rather like each other, and everything is going swimmingly...except for the tiny problem of Victor being too nervous to memorize his wedding vows. He goes into the forest to practice them but, unintentionally, gives the speech and engagement ring to the vivacious and fun-loving Emily, who thinks they are now married.

Oh, did we mention Emily is a walking, talking corpse?

Victor is dragged to the underworld, which ironically heavily contrasts with the drab surroundings of the living by being colourful and vibrant. At first he is desperate to get back home to Victoria, but is soon torn between the life he knew and his life in the underworld. Victor also finds himself drawn towards Emily, whose tragic death may be more entwined with the lives of Victoria and himself than he first thought.

The film has many little shout-outs and references to previous works by Tim Burton. Danny Elfman's character, Bonejangles, is a call-back to his time with Oingo Boingo.

Mr. Everglot tries to smile, but barely does so in a comedic way.

Mr. Everglot tries to smile, but barely does so in a comedic way.