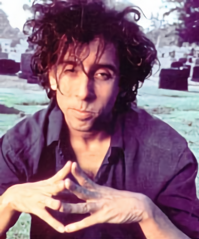 Timothy Walter Burton (born August 25, 1958) is an American animator, film director, and the king of the Perky Goths.

He studied at CalArts before being hired as a Disney animator, working together with Andreas Deja. Before rising to fame, he made a live-action short adaptation of "Hansel and Gretel", the animated short Vincent (narrated by a personal idol of his, Vincent Price), the original short version of "Frankenweenie" and "Aladdin and His Wonderful Lamp" for Shelley Duvall's Faerie Tale Theatre.

Burton's signature style usually combines creepy situations with childlike wonder and a morbid sense of humor. His work tends to combine goth aesthetics (black and white sets and protagonists that harken back to German Expressionism, Gothic Horror, Creepy Shadowed Undereyes, spooky monsters and the like) with high kitsch suburban settings.

Tropes applying to Tim Burton and his work.