Series / A Touch of Frost 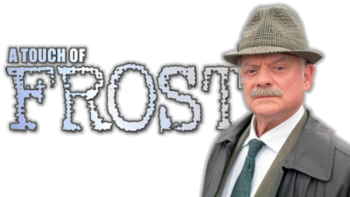 "Get on the radio to the station son and tell Sergeant Wells we found a body in the churchyard. And when he stops laughing, tell him I think it is young Paula Barkner."
—Frost
Advertisement:

A Touch of Frost (1992-2010) was a detective television series produced by Yorkshire Television for ITV. It was based on a series of books by R D Wingfield.

It starred Sir David Jason as Detective Inspector William Edward Frost, G.C., known as Jack to everyone but his late wife. He is a down-to-earth, straightforward copper who is more interested in banging up crooks than figures and statistics. His immediate superior, Superintendent Norman "Horn-rimmed Harry" Mullett, is a by-the-book, procedural man who seems to see Jack as a personal insult.

Let's be fair. Jack is, by whatever measure, a bent copper. He has planted evidence, bribed, bullied and tricked, but he does it to get the criminals behind bars. Old, grumpy and misogynistic, Frost has a near endless supply of dirty jokes and considers teaching someone how to fiddle his expenses claim to be a cornerstone of police training. He is not as great a detective as some other TV detectives are shown, but he is good at his job. The TV adaptation actually toned DOWN the scale of Frost's unscrupulous antics compared to the original crime novels.

He also has the George Cross, a fact that has saved his career more than once, after he tried and failed to commit suicide by armed criminal.

The show concluded in a two-part final in April 2010, with Georgie being killed after the bitter ex-husband of the woman Jack was about to marry drove his car into theirs.