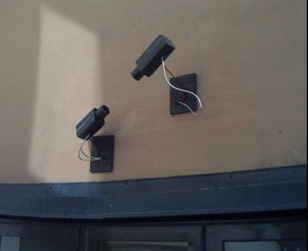 Guys, what did I tell you about using the security cameras for staring contests?
Advertisement:

Security cameras that would, if functioning, have captured images of the perpetrators, were actually non-functional. An issue encountered frequently by detectives solving crimes in modern-day settings, such as in Police Procedural shows.

This frequently happens in detective and police procedural shows, in part to prevent the detectives from having an easy way to find the perp. (Often, the less time left in an episode, the more likely the camera is to work. This would be a prime example of Spoiled by the Format.)

Of course, even a good camera system can be useless if you've employed a Surveillance Station Slacker to monitor it. Compare Camera Spoofing.