Series / A Touch of Cloth 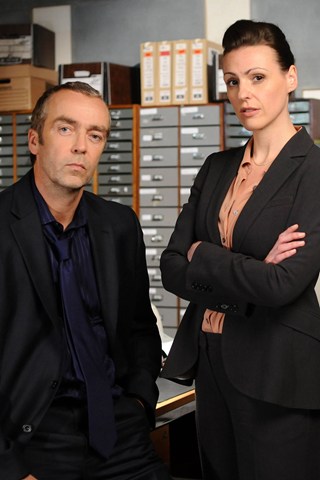 Jack Cloth and Anne Oldman
I hope you've got a strong stomach. It's like a crime scene in here.
Advertisement:

A Touch of Cloth is a British comedy series which spoofs dark, overwrought British Police Procedurals, created and written by Charlie Brooker and Daniel Maier for Sky1. The first two-parter was broadcast in August 2012, with two additional two-parts being broadcasted in 2013 and 2014. Imagine The Naked Gun or Airplane!, but instead aimed at dark crime dramas like Luther or Messiah (along with most crime shows on TV) and you are heading very much in the right direction. Very silly and very funny.

Detective Inspector Jack Cloth (John Hannah), who quit his profession after his wife was murdered, is called back in to investigate a series of grisly murders in the City of Town and is assigned a new partner, DC Anne Oldman (Suranne Jones). With their Chief Constable, Tom Boss (Julian Rhind-Tutt) breathing down their neck for an unrealistically quick resolution to the case, Cloth and Oldman uncover clues that imply that the case might be quite a bit more complicated than they first thought.

In the second series, Cloth goes undercover to uncover a criminal conspiracy involving the theft of a nuclear device and the charity telethon "Help a Blameless Child". The third series, centres around the murder of Cloth's brother, Terry, with Cloth eventually realizing that the culprit is closer to home than he first thought.

This work contains examples of the following, which it generally spoofs mercilessly: