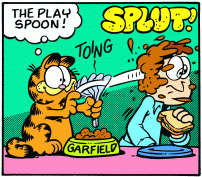 You wake up in the morning and you look at your old spoon, and you say to yourself, "Mick, it's time to get yourself a new spoon." And you do.
— Mick Jagger
Advertisement:

No idea why, but spoons are funny somehow. Maybe it's because "spoon" belongs to the Inherently Funny Words. Interestingly, the word "spoony" has nothing to do with actual spoons. Even better than ordinary spoons are sporks.

If you want to add examples, keep in mind that they should be at least somewhat funny. This trope isn't about "Spoons Exist." Or people named Spooner, or such.

No relation to Spoonerisms.