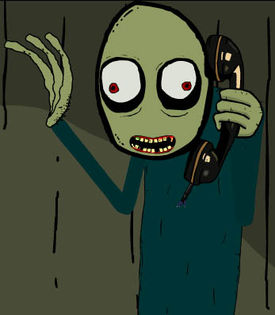 "I've been disconnected."
"I like it when the red water comes out."
— Salad Fingers

A popular web cartoon created by David Firth, Salad Fingers is a notoriously surreal and disturbing series set in a seemingly post-apocalyptic world. The title character is a grotesque recluse with long green fingers, a seemingly sexual fetish for rusty objects, masochistic tendencies, several Companion Cubes, a very loose grip on reality, and a habit of (possibly unintentionally) killing or otherwise harming everyone he meets.

It's that kind of series. We warned you

It's pretty much considered Not Safe For Humanity.

This nightmare of a series provides examples of: