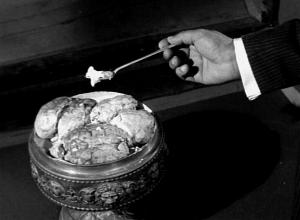 Always remember to eat your breakfast cerebral.
"All we wanna do is eat your brains.
We're not unreasonable, I mean, no-one's gonna eat your eyes."
— Jonathan Coulton, "Re: Your Brains"
Advertisement:

For whatever reason, an amazingly large number of monsters enjoy eating human brains.

Sometimes there is a reason for this lust for pink matter: the monster thinks it will get the powers/knowledge/memories of the unfortunate brain owner — and depending on the monster, that may even be true. Other times... well, maybe brains just taste good.

If there is a brain eater on the scene, expect to see a scooped out head at some point, if for no other reasons that it looks really terrifying. If this is a comedy, there will nearly always be one person 'immune' to the problem, due to not having any brains to begin with.

The trope may be of particular saliency now because we no longer tend to believe that the essence of one's individual humanity, call it a 'soul', resides in (say) one's heart or (as the ancient Greeks supposedly thought) the liver; most of us would tend to place any such thing in the brain.note A notable exception being Stephen Colbert, who prefers the many neurons found in the gut. This gives the trope the impact of some other cultures' urging the victorious to eat their vanquished enemies' heart, or of the torture of Prometheus by Zeus' eagle's daily meal being the Titan's liver, which regrew each day for torment's sake.

The subtrope of brain-eating zombies seems to have originated with 1985's The Return of the Living Dead, with the famous character Tarman shouting "Brains" throughout the film, and most of the time when it appears it is either a reference to that film, or unknowingly influenced by other references to that film. Before George A. Romero and John Russo introduced the Flesh-Eating Zombie in Night of the Living Dead (1968), zombies were not expected to eat people at all, except in some fringe Haitian legends which included anthrophagy as part of a general rampage on the part of the normally passive zombies whose controlling voudun priest had died.

It should be noted that most Romero-style zombies tend to just eat whatever meat they can off their victims until they're satisfied. Zombies of the Russo mold are more inclined to crave people's brains specifically, and since Removing the Head or Destroying the Brain is the general way to kill many such zombies, new zombies tend to arise through infected survivors of zombie attacks rather than merely being killed by the zombies like in Romero's work. As you'll read down the page, you'll find most examples to be zombie free.

A subtrope of Picky People Eater. See also: Zombie Gait. Not to be confused with Brainless Beauty (although being one may have its advantages.)

For the other type of Brain Eater (which primarily shows up among creators), see Filibuster Freefall.

Alternative Title(s): A Mind Is A Terrible Thing To Baste, Eat Your Brains