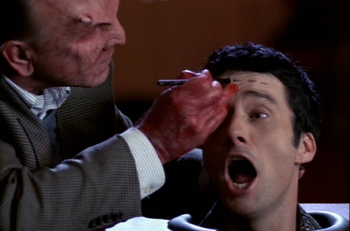 Doyle's attempt to get Angel to put down his book and go out to a sports bar featuring online trivia gets sidetracked by the appearance of Cordelia, in elegant evening wear, who apparently arranged to meet her date, Pierce, at Angel's office. Cordelia enumerates Pierce's many attractive qualities, all of which seem to be material in nature. When Pierce arrives a little later, Angel interrogates the handsome young man until Cordelia manages to drag him out the door.

In some distress at the hopelessness of his own case with Cordelia, Doyle sits on the sofa and idly leafs through one of Angel's books. When a photo of a lovely blond woman slips from between the pages, Doyle picks it up and whistles, asking Angel if his old squeeze would date a man with an Irish accent. Seeing Angel's stricken face, Doyle immediately realizes that this is Buffy and gets up to apologize. Before he's able to say anything else, however, Doyle is struck by another vision, and the conversation is sidetracked again. At Doyle's report of a young guy captured by a band of vampires downtown, the two of them race to the rescue.

Meanwhile, at a posh, upscale restaurant, Cordelia, finding herself "bored silly" by Pierce and his futures trading exploits, entertains herself by imagining what her fellow team members might be up to. In fact, Angel and Doyle are in the midst of a bracing battle in the vampire nest, where they arrived just in time to save the weakened but still breathing victim. After they dust all visible vamps, Angel elects to take their charge home, and sends Doyle back to the office. As they leave, the single surviving nest-member, a large, mean-looking male vamp emerges from hiding.

Unaware that he's being hunted, Doyle lets himself in at the office, while the hunting vampire also observes Cordelia's arrival only moments later. Dropping Cordelia off early because she claims to feel unwell, Pierce makes a couple of last-ditch tries to spend the night with her. When the vamp suddenly shows his face, however, Pierce screams and runs in terror, leaps into his Mercedes convertible and burns rubber backing away. Now alone, Cordelia struggles with her captor in a futile attempt to break away. Suddenly, Doyle reappears on the front steps with a crossbow and an attitude. Taking his only shot, Doyle sends a bolt into the vamp's foot, then engages hand-to-hand as the enraged vampire throws Cordelia rolling to the sidewalk, yanks free and roars to attack. Outmatched, Doyle refuses to morph into demon mode (a reluctance Angel mentioned after the fight earlier), even though enhanced demon strength would be a distinct advantage at this moment of crisis. Even in human form, however, Doyle manages to retrieve the spent crossbow bolt and to dust the surprised vamp. Cordelia is impressed by his prowess and moved by his caring.

The next day, she talks with Angel about her evolving attitude toward men in general, and toward Doyle in particular, coming to the conclusion that Doyle, who might actually have some potential, at least deserves to be treated to a mochaccino as a thank-you-for-saving-my-life gesture. Finding Doyle in the outer office, Cordelia doesn't get the chance to extend the invitation. An attractive young woman opens the front door and stands at the threshold, smiling at Doyle, whom she calls Francis. Stunned, Doyle introduces his wife, Harriet, to an equally stunned Cordelia. Angel has just emerged from the inner office when another stranger pokes his head around the front door. Letting himself in, he goes straight to Angel and, introducing himself as Richard, enthusiastically shakes Angel's hand. After being set straight, Richard turns to Harriet and mentions the wedding, producing more surprised expressions all around. Angel firmly escorts Cordelia out of the room and Richard goes back outside to wait. When they're finally alone together, Harriet gently presents divorce papers to Doyle. Overwhelmed, Doyle says he'll have "his people" look the documents over, and Harriet quietly agrees to come back in a few days.

Later, declining Angel's offer of a shot of scotch, Doyle explains that his demon side, genes he inherited from a father he'd never met, didn't manifest until he turned twenty-one. At this point, he and Harriet were already married. Mentioning that Harriet left because she couldn't handle the fact that her husband was half-demon, Doyle quickly segues into speculation about the real story behind Richard's bland, friendly facade. Worked up and perhaps unaware of his actions, Doyle drinks off Angel's untouched shot. At his friend's request, Angel follows Harriet's fiancé and spots him making a clandestine exchange, then slipping into Straley's Steak House with the package. Inside the restaurant's kitchen, Richard hides the small package in the industrial-sized refrigerator. When Harriet arrives soon after, bearing stacks of department store boxes tied together with twine, Richard goes into a storage area, selects a bottle of sparkling wine, picks up a carving knife, and morphs into a demon. Just as Richard approaches an unsuspecting Harriet, Angel crashes through a plate-glass window and tackles the demon, landing several hard punches before he realizes that Richard isn't fighting back and that Harriet is shouting at him to stop. To Angel's extreme confusion and chagrin, it seems Harriet knows about and is okay with Richard being a demon, to the point of having obtained a degree in ethnodemonology. Richard is a benevolent demon, and the knife was for the box ribbons. Harriet further explains that, while she did freak initially, she quickly adjusted to the idea of Doyle's demon heritage—more quickly than Doyle did himself. When Harriet encouraged Doyle to explore that side of himself, however, Doyle refused. Harriet tells Angel that her first husband just shut down and withdrew, and became "pretty much a bitch to live with."

Doyle finally understands that it wasn't his demon half that broke him up with Harriet, it was his own personality flaws. In a rush of regret and resignation, Doyle signs the divorce papers, then hands them over to Harriet as Richard looks on. When she excuses herself to go make photocopies, Richard takes the opportunity to invite Doyle to his bachelor party. He explains that his clan has a tradition of asking the first husband of a remarrying divorcée to give his blessing to the new union. Meanwhile, in Angel's office, Harriet invites Cordelia to her shower, explaining that Richard's family is very sweet and "into good vibes." Later, at the Straley home, the family assembles at the dining table for dinner where, passing around a bucket of chicken, they finalize plans for Richard's party. Although the beverage choices go without saying, there is some discussion about what food (Buffalo wings vs foie gras) and activities (stripper vs stripper and charades) to provide that would best complement the Ritual of Eating the Ex-husband's Brains.

Doyle brings Angel along to the bachelor party. Richard begins softening Doyle up, hoping to eventually elicit his "blessing," Doyle's symbolic consent to become a ritual sacrifice. Meanwhile, Harriet fills Cordelia in a little more about Doyle's past, alluding to, prior to their relationship, the qualities that first attracted her to Doyle. Cordelia is astounded to learn that Doyle got his teaching credentials at a young age and taught third grade while married to Harriet. She is less surprised to hear that Harriet met Doyle when both were volunteers at a homeless shelter. Back at the bachelor party, Angel leaves Doyle unattended to investigate why Richard's clansmen, Ben and Nick, are retreating into the back room. He overhears Uncle John performing some kind of blood rite and phones Cordelia to ask Harriet for a translation of the Aratuscan incantation. As Angel hangs up and turns away from the phone, Nick deliberately incites a brawl. Four demon kin thrash Angel and toss him out a second story window, where he lies unconscious in the alley below.

After the dancer finishes her routine, Richard rejoins Doyle at the bar and asks him whether he's given any thought to blessing the proposed union. Doyle generously finds it in his heart to not stand in the way of Harrie's new chance for love and happiness and gives Richard his blessing. Hearing the announcement that "consent" has been given, the rest of the guys swarm Doyle and lock him in a wheeled box, shaped like a squat armoire, with doors that enclose his body from the neck down. The hole in the top of the box allows just Doyle's head to be exposed. Uncle John quickly gives Doyle an injection to numb his head and then draws a dotted line across his forehead. Doyle shouts for Angel, but the ritual proceedings continue uninterrupted. Meanwhile, Harriet and Cordelia discover what could possibly be a very disturbing translation of Uncle John's ceremonial knife-purifying incantation, only to have it confirmed by Aunt Martha. The girls leave the bridal shower without a second thought. Out in the alley, Angel regains consciousness and, furious, immediately vamps up. He crashes into the restaurant through another window and Richard's relatives mob him en masse. Richard, just about to cut Doyle's skull open, turns to attack Angel with the ceremonial knife, but Angel kicks it out of his hand and punches him in the face. Doyle finally morphs into his own demon form, breaks out of the box, and joins the fray. At that moment, Harriet and Cordelia arrive and Harriet shouts at the boys to stop. When she confronts Richard about his intention to eat her ex-husband's brains, Richard admits that his family won't allow the marriage unless he performs the ritual, tacitly admitting that he'll abide by his clan's wishes. Harriet looks into Richard's eyes and takes his hands into her own for a few moments, then deftly returns her engagement ring, turns, and leaves. With a small smile, Doyle turns away as well.

Angel and Cordelia watch Doyle mope in the darkened outer office until Cordelia goes out and cheers him up. All of a sudden, Doyle has yet another painful vision. This time, he recognizes the blond woman from Angel's bookmark photo, apparently fighting for her life against multiple foes. When Angel asks, wide-eyed, what he saw, Doyle hesitates to speak Buffy's name.