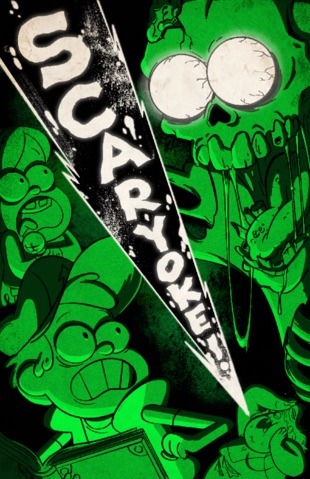 Don't worry, it's just the one.
Where we last left off, Stan has activated his mysterious machine underneath the Mystery Shack, glad that his thirty years of hard work are paying off. As his computers print out an analysis, Stan wonders the repercussions if his plans are discovered. He then dismisses these concerns, and the machine sends out an energy surge. The surge is picked up by mysterious agents, who compare the signal to an identical one made thirty years ago. The agents decide to make a trip to Gravity Falls...

The next morning, the Mystery Shack has its grand re-opening, where Stan shares the glory with exposing Lil' Gideon's fraud with Dipper and Mabel. He announces an after party, which Mabel adds will feature karaoke, and that the Pines Family will do a song of their own. This...isn't something Dipper and Stan agreed on, as neither of them are good singers. Dipper asks for and gets his journal 3 back, unaware that Stan photocopied its contents. Taking Mabel to their room, Dipper notes that even the summer half over, they're still no closer to solving the big mystery of Gravity Falls and the journal; Gideon wanted journal 3 bad enough to destroy the town, and Bill Cipher had mentioned a day when "Everything would change." Mabel dismisses these concerns and tries to get him to enjoy the upcoming after-party.

Back in the gift shop, Stan's pleasure at how things are finally turning his way are brought to an end when Soos' observes a government vehicle of sorts driving up. Panicking, Stan closes the gift shop and chases everyone out. He then meets Agents Powers and Triggers, who have been sent to investigate any strange activity in the area. Dipper is ecstatic- finally, someone else has noticed the town's weirdness, and tries to show the agents his journal. Stan, however, claims as usual that any 'weirdness' is just to sell gift shop items and discredits Dipper as overly-imaginative. Stan confiscates the agents' contact card, much to Dipper's frustration.

As the after-party begins, Wendy helps Dipper find the card which he uses to arrange a meeting with the agents, but are caught by Stan, who is furious that Dipper hasn't given up yet, deciding to ground Dipper after the party. Down in his secret room, Stan notes that Dipper's stubbornness is very much like his own, but decides to focus on his own work. Outside, Dipper shows the agents his journal, but the entries on the sillier creatures of Gravity Falls convince them that it is just another product of the Mystery Shack gift shop. Desperate not to be dismissed, Dipper randomly rattles off a magic spell that summons a horde of zombies!

The zombies attack the party, and while Wendy is able to evacuate the guests, poor Soos is zombified! The twins retreat into the house, but find themselves almost overwhelmed- until Stan bursts in to save the day! As he fights off the undead horde, Dipper notes that Stan can no longer deny the supernatural, but Stan admits to always knowing about the town's weirdness. He claimed otherwise to keep the twins away from it, because that weirdness is dangerous. Though they manage to find sanctuary in the twins' attic room, they know it is just temporary- until Mabel notices that the light from a black light causes new text to appear in the journal. One of these hidden messages shows that zombies can be destroyed by three point harmony; which means that Mabel can have her karaoke trio with her family after all. The three sing "T8king Over Midnight", which eliminates the zombies, except for Soos, who got distracted watching TV. Luckily, the journal reports that zombification can be undone by a mixture of formaldehyde and cinnamon. Stan agrees to let Dipper keep his journal, provided that he only uses it for self-defense, and not to go looking for trouble. Dipper agrees, but only if there are no secrets between them anymore. Both were lying, though.

During the credits, Powers and Trigger, having survived their encounter with the zombies, conclude that whatever's happening in Gravity Falls is bigger than either of them can handle, and decide to call in "the big guns". Gravity Falls is the town they've been looking for.