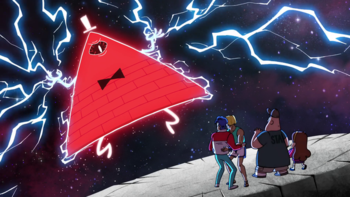 "Eat nightmares!"
Dipper: Get ready, guys. We're about to journey into the most horrifying, disturbing place any of us have ever been... our uncle's mind.

One night, Stan catches Lil' Gideon trying to crack his safe where the Mystery Shack's deed is kept. Stan chases Gideon out, confident that the combination to the safe is secure in his head. Gideon decides to call upon his journal 2's greatest secret...a cycloptic 'triangle guy' called Bill Cipher. Gideon summons Bill, and orders him to find the safe combo in Stan's mind. Upon hearing the name Stan Pines, Bill agrees, stating that in return Gideon can help Bill out with his own plans. With the deal made, Bill goes off to invade Stan's mind. All this was witnessed by Mabel and Soos, who heard Gideon's summoning spell. The two report this to Dipper, who reads in his own journal 3 that Bill is the most dangerous creature in Gravity Falls. However, there is a spell that can be used to enter the mind Bill invades to prevent his chaos. With Stan showing signs of nightmares, the trio go in.

They find themselves in a spooky area similar to the Mystery Shack. Bill appears, and as a display of power zaps a (Non-fatal) hole in Dipper and summons Xyler and Kraz, two fictional characters from the movie Dreamy Boy High. Bill explains that the Shack of Stan's mind has doors leading to different memories; one of which has the memory of Stan entering his safe's code. Bill flies off, and the gang goes to searching. Dipper gets separated from the others and finds a door leading to Stan's 'Dipper memories'. Interested on what his uncle truly thinks of him, and why he always gives Dipper the hard chores, the boy enters. there, he finds a memory of Stan and Soos talking over the old man's treatment of his nephew. Stan says, "The kid's a loser. He's weak. He's an utter embarrassment. I just want to get rid of him." Heartbroken, Dipper leaves.

Meanwhile, Mabel finds the memory of Stan's combination, and Soos offers to destroy it...levitating the door into the air! It's actually Bill, who took Soos' form while the real Soos was distracted. With the memory in hand, Bill races off. Mabel, Soos, and the dream boys give chase and bump into Dipper. But by this time Dipper is no longer interested in helping his great-uncle, and just wants to leave. Bill contacts Gideon, but before he can relay the combo, Mabel knocks the memory into another memory, this one of the Bottomless Pit. At this failure Gideon breaks off the deal, and an enraged Bill attacks Mabel and Soos, transporting them to a floating arena in space and tormenting them with nightmares.

Dipper runs into the memory of Soos and Stan talking, and hears Stan add to his earlier comment, "...Those are things said about me when I was a boy." Stan used to be a wimp as a child, until his father made him take boxing lessons. This is why Stan is so hard on Dipper; he's trying to toughen his nephew up so that he can fight back against the world, and he's actually quite proud of him. At this point Dipper is pulled into the memory. Stan undoes the hole Bill made, and reveals that anything is possible in the mind. With this knowledge in hand, Dipper races off to help his sister and Soos fight Bill. The three do a great job, but before they can finish Bill off, the demon puts a halt to the battle. Impressed by the three, Bill decides that they will be useful in the future and leaves them with this warning; "A darkness approaches. A day will come in the future where everything you care about will change."

The gang wakes up. And while Stan wonders why he dreamed of two impossibly handsome men, the twins and Soos celebrate.

Then the wall explodes. After Bill's failure, Gideon reveals he used dynamite on the safe and now has the deed. Ordering the Pines family out, he has his father take a wrecking ball to the Shack.

In "Dreamscaperers", Mabel finds a memory of Grunkle Stan having an awkward dinner date with Lazy Susan, and his equally-awkward attempt to get out of it.

In "Dreamscaperers", Mabel finds a memory of Grunkle Stan having an awkward dinner date with Lazy Susan, and his equally-awkward attempt to get out of it.