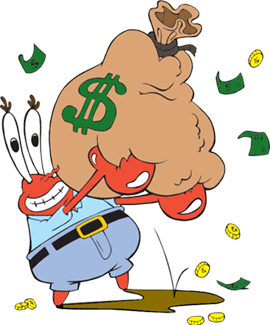 In popular culture, crabs are often associated with greed and materialism. Anthropomorphized crab characters will often be depicted as selfish and ill-tempered towards anyone who tries to take their valuables. Part of this may come from a few old idioms and other terms that relating to crabs. A "penny pincher" is someone who is incredibly frugal with money, and the use of "pincher" tends to be likened to a crab, making for a useful visual pun. The term "crabby" means irritable, which often goes hand-in-hand (or claw-in-claw) with the more greedy crab characters. There's also the fact that some kinds of crabs, with their ragged-looking faces, just look like stereotypical greedy old men. And another association is simply that crabs (and lobster) are often viewed as expensive luxury food (particularly before it became easy and cheap to ship frozen foods) and consequently are associated with money.

This stereotype may also come from some real species of crabs. For example, decorator crabs

are known to take things such as sea anemones and attach them to their backs for camouflage or defense.

Although the stereotype usually only applies to crabs, other crustaceans (lobsters, shrimp, crayfish, etc.) who are greedy can also be added to this page if you know of any.

See Thieving Magpie for more greedy animals, and Giant Enemy Crab for more crabs. Related to Scavengers Are Scum. A surprisingly common sub-trope is the portrayal of crabs not merely being greedy, but as having pirate motifs, crossing over with Semiaquatic Species Sailor.

"What inspired you to write an entire trope page about greedy crustaceans?"
"Money!"note Most of us tropers don't actually get paid to edit this wiki. We're pretty much Doing It for the Art. This is simply meant as a followup to the quote from The Spongebob Squarepants Movie in the image caption.

Mr. Krabs (the Trope Codifier) has shown an obsession with money several times. These are just a few examples.

Mr. Krabs (the Trope Codifier) has shown an obsession with money several times. These are just a few examples.