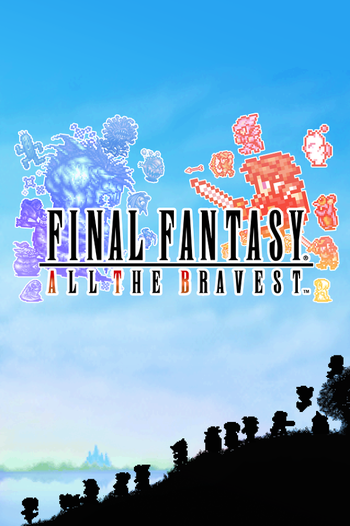 Originally released on January 17th, 2013, Final Fantasy: All the Bravest is a Gaiden Game in the wallet-munchingly popular Final Fantasy series. A 2D RPG for the iOS and Android, the game depicts a solar eclipse occurring, somehow causing the individual worlds of the series multiverse to come together. With the usual named heroes vanished for some reason, it's up to an assortment of nameless warriors to take up arms against the attacking monsters and revived villains. The player commands a party of up to forty party members, consisting of recurring jobs from across the series, as they travel through iconic locations battling a variety of enemies from numerous games including many main villains.
Advertisement:

This was one of the earliest Final Fantasy smartphone games, and it's largely considered an inferior experience due to how terribly simple it is (largely due to the developers not yet being sure how to integrate touch into Final Fantasy). It has been largely abandoned in terms of updates in favor of Final Fantasy Record Keeper (which uses many of the sprites originally made for this game, along with a slew of new ones in a similar style) and Final Fantasy Brave Exvius.