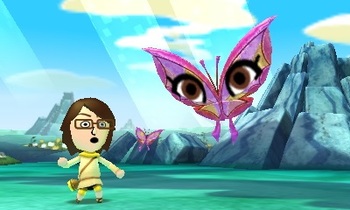 These are eyes, but not its own...
Advertisement:

Moths, despite being linked to the Pretty Butterflies, are often seen as a bad omen. But sometimes, they are more than simply a sinister symbol announcing some kind of threat: they are the threat.

Just like any other Big Creepy-Crawlies, behemoths can be really scary: from up close, they look like any other giant insect and can induce nightmares to any entomophobe. Although they aren't necessarily giant, as some of the below examples prove.

They usually are attracted to light. If so, you'd better turn them off...

Butterflies themselves can appear as a menace, but this is less common since they are usually associated with beauty and grace rather than with the night and the occult.

Compare Macabre Moth Motif, in which these creatures are only used as sinister symbols instead of dealing the pain themselves, and The Mothman for another potentially dangerous mothlike entity. Nothing to do with Wallet Moths, nor with Butterfly of Doom or Schrödinger's Butterfly. If they're far larger than insects have any right to be, then they're also an example of Big Creepy-Crawlies. See also Butterfly of Death and Rebirth.

A man has his sweetheart taken by a small butterfly.

A man has his sweetheart taken by a small butterfly.