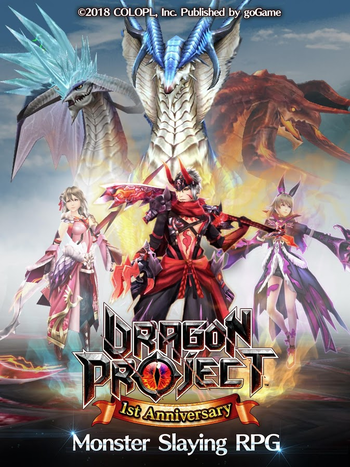 Dragon Project is a free-to-play MMORPG for Android and iOS, developed by Colopl (a child company of Sega), and published by Go-Game for the Global release. The gameplay is similar to Capcom's Monster Hunter franchise, as players team up with a group of four to take on giant monsters called Behemoths. The Global Anniversary trailer can be seen here to see what the game looks like.

A long time ago, the kingdom of Heiland was a peaceful land to live, until the massive crimson dragon, Tiamat, unleashes the horrific Hex of Tiamat, turning once normal animals into the massive and hostile Behemoths. All hope seems lost until a brave spear-wielding hunter named Altair steps in to fight the demonic dragon. Altair successfully defeats the dragon and is hailed as a hero. However, Behemoths are still on the rise, posing a threat to the Kingdom of Heiland, and possibly the world. To combat the threat, the Kingdom of Heiland opens up a guild of hunters to battle the Behemoths, and you are one of them.

The Troper summons these Tropes with 250 Gems: