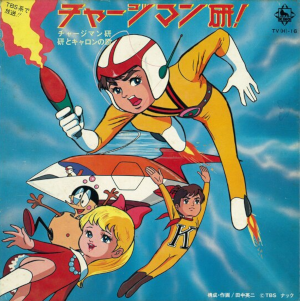 Charging! Go! Go, Ken!
Ken Izumi dons his special uniform and drives his Cool Car called the Sky Rod to fight against evil alien invaders called the Juralians. Ken is joined by his sister Caron and his robot dog Barican (who looks more like some sort of robo-duck).
Advertisement:

Chargeman Ken! is a notoriously bad 1974 Cult Classic anime. Although the studio that produced the show, Knack Productions, was known for low-quality productions emphasizing cheap gags over quality, this show may be the bottom of the barrel even by their standards. The production was something of a reunion for those who worked on Astroganger. Individual episodes only ran five minutes twenty seconds apiece (excluding the opening and end credits), which led to horrendous pacing issues. It was cancelled after 65 episodes. This fascinatingly dreadful series would have been completely forgotten had it not been for the 2007 DVD release being added to Nico Nico Douga. Memetic Mutation ensued. Sadly, no country outside of the series' homeland has ever officially released or dubbed the show. (This was first averted in 2017 when Discotek Media has secured the license to release the show in the United States and Canada into home video.)

Two different manga adaptations of the series, which ran on TV Land and Adventure King respectively, were published in tankobon format in March, 2013. A stage musical based on the series ran from October 31 to November 6, 2019 in Tokyo.