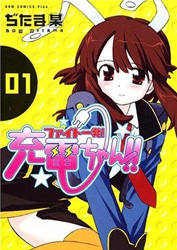 Charger Girl (Fight Ippatsu! Juuden-chan!!) is a manga series by Bow Ditama, legendary manga artist of kiss×sis and Mahoromatic. This is decidedly more Fanservice-laden than the latter but not nearly as outright adult-oriented as the former.

By electrocuting them until they cheer up.

The series has been licensed by Crunchyroll, and can be viewed here

Character page is a work-in-progress.