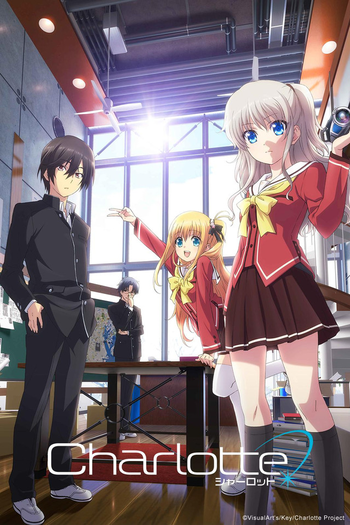 Left to right: Yuu Otosaka, Joujirou Takajou, Yusa Nishimori, and Nao Tomori.note Not pictured: Charlotte
From when I was little, I had a question in my mind.
"Why am I myself, and not someone else?"
—Yuu Otosaka
Advertisement:

Very few adolescent boys and girls have an onset of special abilities. Yuu Otosaka is one such boy who uses his ability to possess other people for five seconds unbeknownst to others in order to lead a satisfying teenage boy's life: revenge against those who pissed him off, sneaking peeks at girl's bodies, cheating his way into a prestigious high school, and targeting a school idol as his girlfriend.

Then one day, a mysterious girl from another high school named Nao Tomori suddenly appears before him and ruins all of his comfortable life in his new high school by exposing his cheating tendencies.

In order to ensure he does not abuse his power again, she arranges for him and his little sister Ayumi to be transferred to Hoshinoumi Academy, a school for those with special abilities, that ultimately ends his chance with the girl who became his target due to their inability to maintain a long distance relationship.

Becoming a part of Hoshinoumi Academy student council along with Nao and her friend Joujirou, these three reveal the destiny for wielders of special abilities, and trying to keep them responsible and not abusing their powers like Yuu did before.

Charlotte is an original Seinen anime written by Jun Maeda, created by Key and animated by P. A. Works, all of whom are from Angel Beats! tenure. Airing as part of the Summer 2015 Anime lineup, it can be viewed here

on Crunchyroll for people in North America, Central America, South America, United Kingdom, and Ireland. Aniplex USA has acquired this anime's license and it was announced with an English dub, making Charlotte the first Key/Visual Arts anime title to get a dub from Bang Zoom! Entertainment.

Now has a Characters Page in need of additional information.

Ayumi loses it upon seeing Yusa in person.

Ayumi loses it upon seeing Yusa in person.