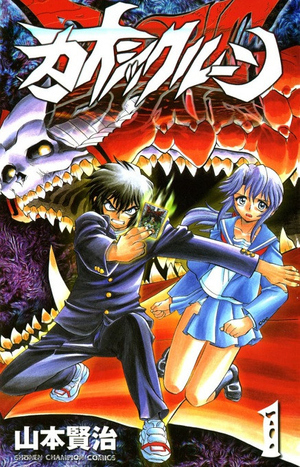 Chaosic Rune is a manga by Kenji Yamamoto, which ran in Weekly Shonen Champion from 2003 to 2004.
Advertisement:

The story begins with Ryouga, the protagonist, angsting over the death of his parents in a plane crash. The primary cause of said angst is that he was the only survivor of that crash, and the remains of everyone else had been eaten. A mysterious man invites the hero to come with him, claiming to have the answers to the questions the young man has. He is taken to a facility up in the mountains, and is placed in a room with several other young men. A set of cards is dropped into the room, and the first person that picks up a card suddenly has a monster emerge from his guts. This person has the monster go on a killing spree, and soon a battle royale begins. What is going on with all these strange cards? Where are these monsters coming from? And why does this seem eerily similar to a children's card game?

There is a sequel, and it is even more bloody. Unfortunately, the sequel seems to be on indefinite hiatus since no new chapters have been released in many years.