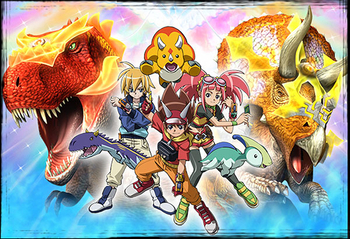 The anime features the adventures of Max, Rex and Zoe, a trio of dinosaur-loving kids who search for dinosaur cards scattered all over the world before the Alpha Gang can retrieve them.

The series has been brought to the U.S. by 4Kids using much of the same cast from their previous mon success, Pokémon. You can watch it on Netflix or KidsClick as of February 2018, and Discotek Media acquired the home video license later that year. A Nintendo DS video game has been made that is based on the anime.

In the grand tradition of the internet, the show has its own Wiki