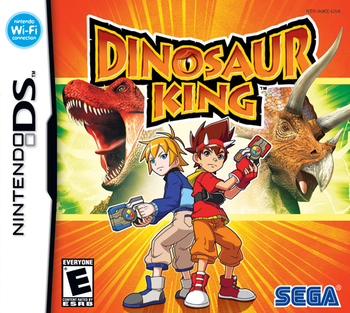 Dinosaur King is a CCG arcade game from Japan. The player pays for a starter deck and scans the cards into an arcade cabinet. Then they play a fighting game where dinosaurs (real ones ranging from obscure to well-known) with superpowers fight both each other using both a literal rock-paper-scissors and an Elemental Rock–Paper–Scissors battle system. As the player progresses, the arcade cabinet dispenses newer and rarer cards for them to add to their deck.

Oh, and the superpowers? They're never really explained. We're just supposed to accept the fact that dinosaurs all had superpowers and the ability to breathe fire, electrify their bodies, and change in size. Rule of Cool, of course, applies.

A tie-in anime was eventually developed. It features the adventures of Max, Rex and Zoe, a trio of dinosaur-loving kids who search for dinosaur cards scattered all over the world before the Alpha Gang can retrieve them. The series has been brought to the U.S. by 4Kids and is considered to be one of their best dubs. You can watch it on Netflix or KidsClick as of February 2018, and Discotek Media acquired the home video license later that year. A Nintendo DS video game has been made that is based on the anime.

In the grand tradition of the internet, the series has its own Wiki