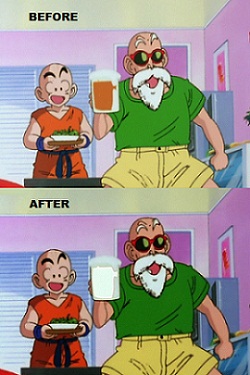 Family-friendliness gets Master Roshi Drunk on Milk.
Gnomelette: I'm on a quest to find and eat some potion.
Colette: Eat? Are you sure you're talking about potion?
Gnomelette: It's something that's only for adults that makes them feel good.
Raine: It seems he really does mean potion.
— Tales of Symphonia
Advertisement:

The censorship of alcohol, cigarettes or other drugs in a family-friendly work. Often, the media makes no attempt to disguise the effects of intoxication, only the source. Drinks will be changed into "fruit juice" or "tea". Cigarettes and the like will likewise be changed into the most similar everyday object. The effects of being drunk are often attributed to something else such as poison or sleeping potion, or a sense of being "relaxed". Too much tea, apparently, makes you so amazingly relaxed that you lose control of your legs, throw up in a corner and lose consciousness. A non-alcoholic variant, seen almost exclusively in dubbed anime, involves changing coffee into cocoa or hot chocolate because the characters involved are "too young" to be drinking coffee (similar to an old myth that drinking coffee while young will "stunt your growth"). Or simply because kids aren't known to enjoy the taste of coffee in the west.

Of course, they could've used root beer or sarsaparilla (which are equally frothy and are identical in color to their alcoholic kin), and attribute the resulting behavior to a sugar high, but then that would get the healthy eating bodies after the importers of the show instead. Add that to the fact that new science is starting to suggest that sugar highs don't actually exist.

This often happens in family films. Any use of real drugs or alcohol will give a film a PG-13 rating, restricting profits. Television shows, which are made and/or aired by companies that also make films, tend to follow this lead. Note that in some cases, this is required — for example, U.S. law prohibits depictions of cigarettes in television programming for minors, so those will always be edited out or into something more innocent. (Oddly, the law only prohibits cigarettes — this is why Sanji from One Piece has his cigarette airbrushed out in the American broadcast version of the Funimation dub, but Captain Smoker is allowed to keep his cigar.)

An exception to this rule occurs in a Very Special Episode themed around alcoholism. A character (usually a teenager) takes up drinking in an attempt to appear "cool" and "grown up", only to find that alcohol completely screws them up. The episode ends with An Aesop in which the character and their friends talk about the importance of drinking in moderation - if you drink at all.

See also Family-Friendly Firearms, which can involve applying the same type of censorship to guns.