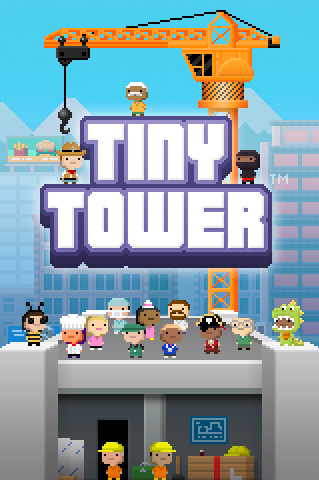 The game where you can have a bowling alley on the 3rd floor, an entire courthouse on the 14th, and a whole soda brewery plant on the 75th.

Tiny Tower is a Raising Sim for iOS and Android. It has an 8-bit theme, combined with non-chiptune lounge music. Created by Nimblebit in 2011, it is one of the most addictive and successful free iPhone games of all time. Although the full version of the game is free, you can pay real money to buy more bux, which is useful for lots of stuff, including converting bux into coins. Coins are the main currency unit of Tiny Tower.

The objective is to build the tallest tower and to give jobs to the NPCs that live in Tiny Tower. They are called Bitizens, which is a combination word of the words bit and citizen. Each of them have their own Dream Job, which allows their business to have double stock. Some have low skill levels overall, some have a mixture of low and high skill levels, while others have high skill levels overall. The game has no ending, even if you have no new types of floors to construct.

In 2016, Nimblebit released a huge update to the game to celebrate its 5th anniversary, adding dozens of new floors, costumes, missions, a new form of currency, and the Rebuild feature.

Two spinoffs have been released for the game, including a Star Wars-themed spin-off called Star Wars: Tiny Death Star and Tiny Tower Vegas, a gambling-themed version of the game. Due to Executive Meddling, Disney pulled Tiny Death Star from the App Store and Google Play as they wanted to take the Star Wars games in a different direction.