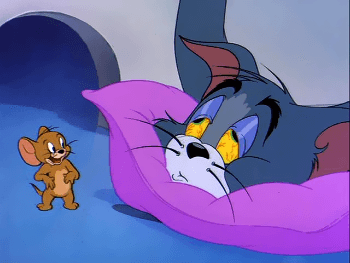 Not having slept enough sucks, both in Real Life and in Fictionland. This trope deals with such situations. Characters more or less voluntarily choose not to sleep, or there are some external factors causing them not being able to sleep, or they keep waking up all the time.

Characters who can't sleep or haven't slept well become irritated, tired, exhausted, sick, crazy, desperate, proud of the accomplishment... It depends how serious the situation is and how it is played. It can be played for laughs, for drama or horror. Those who can't sleep will often have Exhausted Eye Bags and the situation might lead to them looking Seriously Scruffy, even after just one sleepless night, though it's more common to show after a longer period of sleeplessness.

Sleep Deprivation in fiction can come about in various ways: